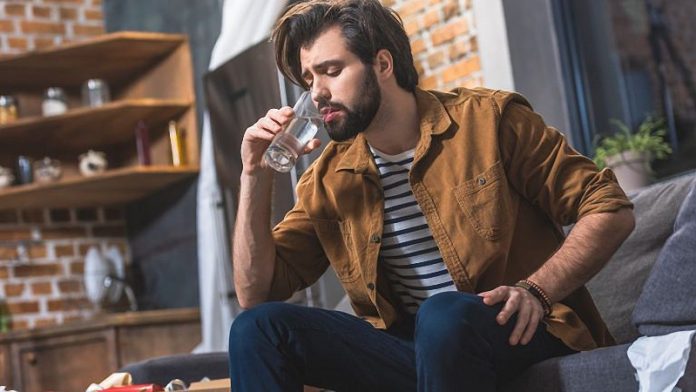 With the rising popularity of Kratom, the number of its users is increasing by the day. However, people do not know much about the product, which has lead to confusion among various groups of users.

For example, some people argue that Kratom causes a hangover, while others deny the claim. So, it is important to clear all confusion so that people can take full benefits from the herb without any consequences.

Does Kratom cause a Hangover?

Various people have reported having experienced a hangover from Kratom. Even though some people might not agree, but there is no denying that Kratom does cause a hangover.

But considering the vast benefits of Kratom, the side-effects are negligible.

In fact, one can take certain precautions to avoid a Kratom hangover.

But before moving on, let us discuss some of the most common hangover symptoms:

The most common and the most prominent symptom of a Kratom hangover is nausea. However, nausea caused by Kratom is not acute and typically occurs in the morning after a night of excess use of Kratom.

Furthermore, the intensity of nausea varies from person to person. Someone people might not even feel it.

People have also complained about feeling tired and unrestful after a night of excessive use of Kratom. Such a feeling might leave to unable to work or make you oversleep. Nevertheless, lethargy is an uncommon symptom and occurs only for a few hours.

Another symptom of Kratom hangover is sleep disturbance, which, even though mild, can cause concern.

What to do if you get a Kratom Hangover?

Before we go on discussing how to avoid a Kratom hangover in the first place, let us first talk about what to do in case you are already experiencing one.

Here are some of the things you can do if you feel a Kratom hangover:

One of the causes that trigger a hangover is dehydration. So, the obvious solution would be to drink plenty of water. This would restore the optimal water level in the body.

Once you are hydrated, you should try relaxing by laying down on a bed or a sofa. To take it a step further, you can place a cold compress on your forehead for a soothing effect.

If the symptoms do not seem to subside, try taking a nap. Sleeping is the best way to relax and unwind your body to reduce stress completely.

Another thing that can counter the symptoms of a Kratom hangover is exercise. Obviously, we would not advise you to hit the gym in such a condition; however, taking a stroll or a bit of walking might help you relax and diminish the symptoms of the hangover.

Eating meals that are high in protein are known to reduce symptoms of a hangover. So, the next time you find yourself dealing with a Kratom hangover, treat yourself with a chicken or beef broth.

In cases where nothing seems to work, and your daily routine is being gravely affected, do not hesitate to take over the counter medication to treat the hangover symptoms such as headache or nausea.

How to avoid the Hangover in the first place?

As it is wisely said: Prevention is the best medicine; here are some of the most effective things you can do to ensure that you never face a Kratom hangover:

Moderation is the key

The most common cause of a Kratom hangover, or for any other hangover for that matter, is overdosing.

If you take Kratom in moderation, there is a negligible chance for you to get a hangover.

For example, if you are just starting out, it is best to start with a lower dose of 1 to 2 grams and gradually build up the dose over the weeks until you reach your optimum dose.

And once, after experimentation, you find your optimal dose, stick to it.

Avoid taking doses of 7 grams or higher as these are considered high doses and are most likely to trigger side effects and hangovers.

Due to Kratom being an illegal drug in many states, it is left unregulated by the authorities. This has led to Kratom being sold on any and every type of brick and mortar store.

Always look for a reputable vendor that is not only trusted but is transparent. Make sure that your vendor takes steps to ensure the quality of the product and its production process.

The mistake most people commit is that they take Kratom frequently, several times a day. The reason it is a bad idea is that, if you take Kratom frequently, your body becomes tolerant to its effects sooner. Once that happens, you’ll increase the dose, which might end up doing you more harm than good in the form of hangovers and other side effects.

Therefore, the best method to take Kratom is to take it at lower frequencies.

Consume Kratom only when you need it. Avoid taking it daily, thrice a day should be enough.

And if you start feeling adverse effects, you should lower the frequency.

The best way to consume Kratom is through capsules.

It is much easier to estimate the dosage in capsules than in other methods such as tinctures, powder, etc.; thus, lowering the chances of an overdose.

Moreover, it is also considered the safest way of Kratom consumption by experts.

The fact that Kratom can cause a hangover should not scare you away from Kratom. Kratom is known to be a helpful herb in treating arthritis and relieving pain and stress. Its benefits are far more than its possible side effects.

Moreover, the chances of experiencing side effects of Kratom can be lowered to zero if you take proper consideration of the quality, dose, and other steps mentioned in the article.

Juicy Fields: Let’s Invest In Cannabis Businesses You Believe In!

Unwrap The Benefits Of Magic Mushroom

Can I Take CBD While Drinking?