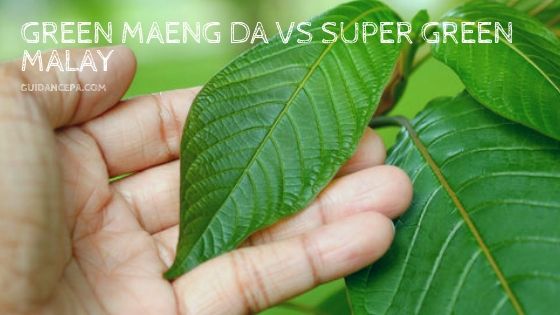 For years people from all around the world have consumed Kratom either for medicinal reasons or recreational purposes. Various blogs have been written on the benefits and effects of this mysterious substance, but very few bloggers share real-life experiences and help users in selecting the right strain and type of Kratom for themselves.

We believe that people should study and understand the both sides of this potential tree. I am writing this article to highlight the properties of two potential strains: Green Maeng Da vs. Super Green Malay.

As you must have observed that both the strains are derivatives of green-veined Kratom, so you must be expecting that they are similar.

There are similarities obviously, but I’ll be sharing the unique properties of each strain — the origin of each strain, the effects, and where to buy these strains from.

Before we indulge in the depths of each strain, lets have a brief overview of Kratom. As most of you know Kratom is a plant that is grown in Southeast Asia, and traditionally used as a stimulant.

It contains the active component known as Mitragynine and 7-hydroxymitragynine with multitude of other alkaloids and flavonoids that make it a unique substance.

Though it has a range of beneficial effects — yet to this day it has been a center of controversy as the FDA and DEA has not approved it.

Various incidents like overdose effects, and salmonella outbreak related to Kratom has made it notorious.

However, we aim to promote the aspect of Kratom that the FDA fails to acknowledge.

Don’t get confused, we are talking about the central vein of Kratom leaf here. The vein can be red, green or white.

Our primary focus will be on the green veined Kratom as we will discuss in detail Green Maeng Da and Super Green Malay in the following paragraphs.

What is Green Maeng Da?

Mitragyna Speciosa or Kratom has a very famous strain that is used in most parts of the world. It is known as Maeng Da.

The Green Maeng Da Kratom is grown in regions of Malaysia and Indonesia. It has a high content of alkaloids and flavonoids — making it a very potent stimulant. It has mild analgesic effects and acts vigorously on the brain receptors when taken.

What are the effects produced by Green Maeng Da?

Green Maeng Da is known to have the following effects and properties;

It helps improve the energy levels, increases focus, and attention span. It might helpful for productivity by allowing one to work better and more extended periods without the urge to sleep.

It causes effects similar to instant coffee without any jitteriness associated with coffee. This effect of stimulation is used by people who work for long hours in offices.

Green Maeng Da helps retain creativity and allows one to function better without causing mental or physical fatigue. This effect was traditionally used by farmers in Southeast Asia to work better at farms.

This property is common to all strains of Kratom, but since Green Maeng Da is excessively potent, it produces more euphoria.

This euphoria isn’t similar to ecstasy, it is calmer and makes one feel good about himself and his surroundings.

It uplifts mood, and thus it can be used in stressful times to improve mood.

People suffering from depression and anxiety take this strain to help cope up with low mood and anxiousness. It boosts the confidence levels and thus promotes socialization.

A person who is shy and faces difficulty in interacting and mingling with people at parties and events can take Green Maeng Da to boost their sociability.

Green Maeng Da provides a moderate amount of relaxation. This unique property is beneficial for persons who want mental relaxation as well as increased energy at the same time.

It helps soothe one internally by mediating effects of neurotransmitters that cause relaxation.

At higher doses, Green Maeng Da can act as a sedative as it causes too much relaxation when larger doses are taken.

Caution must be taken in those persons who are suffering from respiratory disorders like sleep apnea, COPD, asthma, bronchitis, etc.

Green Maeng Da provides mild analgesia. So, people can use it as a painkiller too. It is not as strong as the red strains of Kratom, but it helps in the management of headache, etc.

What is Super Green Malay?

It is the green-veined Kratom derived from Malaysia. Why do we call it super? There’s a different reason for this. It is said that the bigger leaves of Kratom are richer in alkaloids. This strain is from the broad leaves of Green-veined Kratom. Thus, it is known as Super Green Malay.

What are the effects produced by Super Green Malay?

Super Green Malay is known to have the following effects and properties;

It is said that within 20 minutes of intake of Super Green Malay one starts feeling happy and euphoric. For people who tend to stay stressed or have negative thoughts, this strain of Kratom works like magic.

The concentrated alkaloids give an effect that lasts longer and is more potent than the Green Maeng Da when it comes to producing euphoria. The results start appearing even at low doses of 2 grams and last up to 6-8 hours.

As compared to Green Maeng Da, Super Green Malay is a stronger painkiller. It quickly acts on the pain receptors throughout the pain signaling pathway to cause numbness. Thus, those who are suffering from chronic pain due to various reasons can take Super Green Malay to relieve their pain.

Super Green Malay also increases your energy levels as it is a potent stimulant. It also improves focus, brings about clarity of mind that lasts for several hours. Unlike most of the brain stimulants, it doesn’t drain you or makes one fidget. It has very less potential for addiction as well as built up of tolerance.

As studied from the paragraphs above, one can say that both strains are equally effective with the Maeng Da strain being more potent but having short-lived effects.

The Super Green Malay Kratom is highly energizing too, but it has comparatively lesser potency than the Green Maeng Da Kratom.

Nevertheless, the long-lasting impacts of Super Green Malay are favored by some; therefore, it is justified to say that both strains have incredible potency, efficacy, and properties.

The side effects profile of both types of Kratom is low; thus, you don’t have to worry about any adverse reactions.

Both kinds of Kratom act on as low dosage as 2 grams, so always build up your dosage instead of starting with massive doses.

What are the side effects associated with them?

Few people reported the following side effects after ingesting Kratom;

Where can I buy Green Maeng Da and Super Green Malay from?

It is vital that the Kratom you are buying has consistent quality and potency, and very few vendors qualify on this criterion.

From user experiences, Super Natural Botanicals is one of the best sellers in the Kratom industry. Their products are genuine and usually low priced. At the same time, they ensure to maintain the quality of Kratom, with proper packaging, timely shipping, and satisfying customer help services.

Ketum Superior is also a reliable vendor as they ensure the best quality of Kratom in affordable rates with adequate discounts, sales, and fantastic shipping. They have one of the largest online Kratom stores that also include CBD products. Overall, they are satisfactory.

Authentic Kratom is an emerging brand in the Kratom industry. They strictly follow the FDA and DEA regulations. They provide a large variety of Kratom products with short descriptions. According to user reviews, it is a reliable brand.

To sum up have a quick look at the list of things that are very important to improve your experiences with Kratom usage;

CBDPure Review: We Tried & Tested It

Best CBD Flower Strains & How To Use It