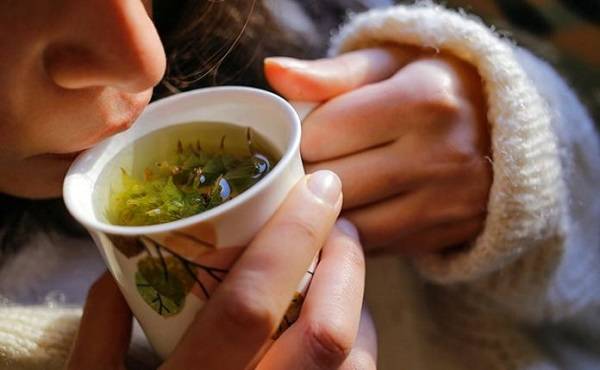 For centuries, people in Malaysia, Thailand, and other countries in Southeast Asia have used leaves from the evergreen Kratom tree. They used it to balance mood, induce relaxation, and boost energy among other uses. Among the most widely-used ways of consuming this amazing herb was brewing it into their tea.

Kratom contains a variety of phytochemicals, among them the indole alkaloids 9-methoxy-corynanthidine (mitragynine) and 7-hydroxymitragynine. Mitragynine is similar to ergine (LSA) and psilocybin in its 4-substituted structure.

It was previously believed to be the main active component. Later, it was found that 7-hydroxymitragynine was 46 times more powerful, with greater blood-brain barrier penetration and oral bioavailability.

Today, Kratom is becoming increasingly popular around the world, especially in the form of Kratom tea. Many enthusiasts of this herb prefer to crush its leaves and use it to brew tea. This method of consumption offers benefits that other methods do not.

If you’re among those considering trying out Kratom tea, then this is the right article to guide you. Here, we’re going to take a close look at the effects, benefits, and methods of preparing Kratom tea.

A Brief History of Kratom

The precise origins of Kratom use are not clear, but there is no doubt that the practice is ancient. In the regions where it is indigenous, the historical uses of Kratom leaves are wide-ranging, including:

The most widespread use has been gaining an energy boost by chewing on the leaves the same way coca has been used in the Andes.

At least as early as the beginning of the 19th century, Kratom has also been used in Malaysia for its sedative properties, especially as an alternative to opium. As enthusiasm regarding its potential medical uses continues to grow, mitragynine which was believed to be its active component.

It was isolated and tested in humans by 1932. Its stimulant effect on the central nervous system is similar to that of cocaine.

In the early 1940s, the Thai government reported huge declines in revenues from opium tax. Evidently, users of the drug switched to Kratom, then unregulated, to alleviate their withdrawal symptoms. In August 1943, the government passed the Kratom Act, prohibiting the cultivation of the drug. These actions led to the destruction of all existing specimens.

Meanwhile, scientific interest in Kratom prevailed elsewhere. 7-hydroxymitragynine, the second primary psychoactive component in the herb, was identified in 1994. Mitragynine was first synthesized the following year.

The US government has tried many times to ban the use of Kratom. However, numerous campaign and advocacy groups across the country—such as the United Kratom Association and the Botanical Education Alliance—have stepped up to safeguard the legality of its use.

As a result, the DEA was forced to withdraw a “notice of intent” aimed at including Kratom in the list of substances in the Controlled Substances Act. Currently, interest in the plant continues to increase. The DEA still has it in its cross-hairs despite most people using it primarily for its therapeutic purposes.

While research on Kratom still has a long way to go, many studies have been carried out to investigate the effects of Kratom. The benefits are as follows:

At this point, you might be wondering what it is about Kratom tea that has made it so popular globally despite it having a tart, muddy taste. Why would those who evangelize it want people to ensure the bitter flavor?

It’s simple. Compared to other methods of ingesting the herb, brewing tea from crushed Kratom leaves has definite benefits that are not available with other forms of ingestion. These advantages are as follows.

Kratom users who consume the plant by using its crushed leaves to brew tea attest that it tastes far less bitter than it does when consumed in its fine powdered form. This is especially the case if you add lemon and honey among other flavors to your tea.

Among the common side effects of consuming Kratom is abdominal pain. Anecdotal evidence shows that consuming Kratom in the form of tea is the method of consumption that causes the least pain. This is in comparison to chewing the leaves.

Adding a dash of lime or lemon is a common way to flavor Kratom tea. It’s, therefore, an added advantage that the acid in lime or lemons juice is known to be a Kratom potentiator. Alkaloids present in the herb can dissolve in certain citric acids, which improves their absorption in the body.

Citric acids also inhibit certain enzymes responsible for the metabolization of the psychoactive elements in the plant. As a result, the effect of the herb lasts longer and is more powerful than it would have otherwise been.

4) For Some, Sipping is Preferable to Chugging

Some users of Kratom find methods such as “toss and wash,” which involves chugging the powder, highly unpleasant. To them, ingesting the herb slowly through sipping is gentler, and you can take your time while consuming it.

5) Kratom Tea Feeds Into the Ritualistic Aspect of the Culture

It won’t be long before you start looking forward to the session of which drinking tea is a major part.

Disadvantages of Consuming Kratom in the Form of Tea

Just as Kratom tea has unique benefits, it also has clear downsides.

1) The “Toss and Wash” Method is Quick

Among the most common alternatives to consuming Kratom as tea is the “toss and wash method.” With this method, you toss fine powdered Kratom into your mouth. Then you “wash it down” with a drink of your choices, such as juice or plain water. This allows you to consume the Kratom quickly.

A user who chooses this method will be done faster than even the quickest Kratom tea user. Drinking Kratom tea takes at least 15 minutes depending on their method.

If you do it the right way, the “toss and wash” method lets you ingest the Kratom quickly without having to endure that bitter taste. You use the best sweeteners in your Kratom tea.

Still, you’re left to contend with the bitter taste of the herb in every sip. You can, however, avoid this by using certain recipes for preparing Kratom tea.

The Process of Preparing Kratom Tea

Having familiarized yourself with the history, effects, advantages, and disadvantages of Kratom, you need to acquaint yourself with its preparation method.

The instructions are as follows:

1) Use the digital scale to take an appropriate dosage of Kratom.
2) Put the Kratom powder, one cup of hot water, and two tablespoons of lemon or lime juice into a French press.
3) Give the mixture about 15 minutes to steep, stirring occasionally.
4) (Optional method) Some enthusiasts of the herb prefer to wash it twice to extract additional alkaloids from it. If this is the case for you, follow these steps

5) Add your preferred sweetener such as stevia or raw honey.
6) Enjoy your Kratom tea.

Some Myths About Kratom Tea

Common misconceptions about Kratom tea include:

When brewing Kratom, both work just fine. Some Kratom tea drinkers prefer to use crushed Kratom leaves simply because it’s easier to strain with this method. However, both crushed and powdered Kratom leaves will achieve the same results.

There is no basis for these claims. Both red-veined and green-veined/white-veined so-called strains can be seen growing on the same tree. The color of the veins is a result of maturity, genetics, and sunlight exposure.

3) You can Avoid Building Tolerance by Rotating Strains

Some users claim that rotating different strains in a week such that no consuming no strain more than two days in a row helps avoid building tolerance. The opposite is, in fact, true. Even though different strains have varying active indole alkaloid levels, the same alkaloids can be found in all strains.

The most effective way to avoid tolerance—or addiction, to be specific—is using Kratom tea in moderation.

Many companies online sell powdered or crushed Kratom for making tea. However, it’s a good idea to research the companies. Read some online reviews before settling on one seller to improve your chances of getting top-class Kratom. If you take your time to search, you might even find one of the few companies selling good pre-made Kratom tea bags.

It’s a good idea to try and determine the source of online vendors. The herb is indigenous to Malaysia, Indonesia, Thailand, and the surrounding areas. Not every region in Asia is conducive for its growth. It only exists in the tropical rainforests of the regions in Southeast Asia.

The Kratom from each area has some unique effects that are common to all the strains that grow in that region. So, depending on the source, some of the benefits offered by the Kratom you buy might not be available with the Kratom from a different source.

To get the most benefit from Kratom, you need to figure out what you hope to achieve from it. The herb’s benefits span various important aspects of life. You can use it for:

The beauty of Kratom is that you can enjoy all these benefits. Just be sure to choose the right variety from a well-established vendor and adjust the dosage just right. It is, therefore, imperative that you self-evaluate to determine what you need from the plant.

Some strains pack phenomenal medicinal powers while some are perfect for recreation use, so be sure to state your reasons for buying the Kratom.