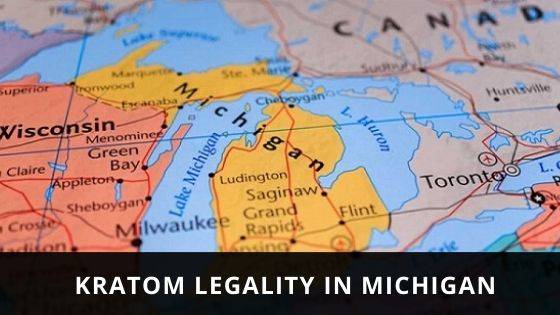 Kratom is a substance that is usually farmed and manufactured in Southeast Asia countries, like Thailand and Malaysia, etc.

It has many benefits and effects and is a popular alternative to opioids. It helps in relaxing muscles and is ideal for pain relief. It can also be used to achieve a euphoric feeling and improves the mood of the user.

Some strains of Kratom have the benefit of improving both the mental and physical cognition of the user.

Kratom is a somewhat controversial substance. A reason for this could be that not much is known about the substance, and proper research has not been conducted yet.

The Food and Drug Administration has also issued warnings with regards to the consumption of Kratom.

Because of this and many reasons, many countries and states in the USA have made the consumption, possession, and dealing with Kratom as illegal.

The Legal Status Of Kratom In Michigan

In the USA, Kratom is legal. However, it should be noted that this legality is of Federal status.

Hence, the laws of the relevant State should also be taken into account. In the State of Michigan (USA), Kratom is currently legal.

This legal status came about in February 2018. It is permissible to manufacture, distribute, sell, and possess Kratom.

The state is more in favor of Regulation, as opposed to a banning of the substance. The Bill being considered is called, Kratom Consumer Protection Act.

This Act will allow the users to consume Kratom safely, without any concerns.

It will also enable companies to distribute Kratom according to the correct standards, as it addresses the manufacturing, distribution, and selling of the substance.

The relevant corporations will have to conduct lab tests of Kratom products and will also have to mention the ingredients of the product.

Directions with regards to consumption or usage of the product must also be specified. If corporations don’t comply with this law, it will result in a misdemeanor that is punishable for up to 90 days in jail.

This Bill was introduced by Republican Sen. John Bizon, who is a medical doctor from Battle Creek.

Under this law, Kratom can be obtained upon the prescription and guidance of a healthcare professional. Those who are under 18 will not be permitted to use or deal with Kratom.

If the Bill is passed, the Michigan Department of Agriculture and Rural Development would be responsible for the regulation and overseeing compliance with the law.

For now, this Bill is not yet law. It has been introduced in the Michigan Senate and awaits a hearing in the Committee on Agriculture.

Previously, due to so many warnings by organizations and unfortunate incidents, the use and sale of Kratom went down significantly.

The introduction of this law will lead to more regulation and counter these problems. And at the same time, it will also increase sales in the local and online shops.

That is because the Senate would never make a substance legal if it were so dangerous.

Hence, the legal status will assure people of safety in using Kratom. It will increase confidence and trust in the effects and benefits of Kratom.

This Bill will allow companies to generate significant revenue without any concern about the uncertain status of Kratom. In short, it will benefit both consumers and vendors.

There was also another Bill, called House Bill 5707 (or HB5707). This Bill was introduced in 2014, and it aimed to add Mitragyna speciosa to the list of Controlled Substances.

Mitragyna speciosa is an alkaloid that is present in Kratom. The result of adding this to the controlled substance list would have made Kratom illegal in Michigan.

What Hinders The Legal Status Of Kratom?

Many factors contribute to the opinion that Kratom is dangerous and hence, should be made illegal. This opinion has made it very tough for many to advocate for the legal status of Kratom.

One factor is the constant warnings by organizations like the FDA. As mentioned above, the FDA does not promote the usage and consumption of Kratom due to high risks of contamination with bacteria, Salmonella, and heavy metal poisoning. The Salmonella outbreak led to 199 people being sick in 41 states.

Even now, Kratom is not regulated by the FDA. The reason being that not much is known about the substance; proper and extensive research has not been conducted, and even clinical trials have not yet occurred.

The FDA Commissioner, Scott Gottlieb confirmed this. They have, however, started researching in April 2019, to understand the substance better and make a definitive statement.

But since the exact mechanics of Kratom have not yet been verified, the FDA has banned companies and vendors from making health-related claims when it comes to Kratom.

FDA warnings have also made the media somewhat biased when it comes to Kratom. And because of this, the media usually only highlights the negatives of the substance.

The press rarely ever highlights the benefits and uses of Kratom and the instances where its use was successful and recommended.

For example, there was widespread coverage of the conviction of Matthew Dailey.

He had pleaded guilty of illegally smuggling the substance and selling it unlawfully and was sentenced to 2 years in prison. He also forfeited USD 1 million in illegal proceeds.

The media conveniently focused on one vendor who broke the law and then generalized. It failed to recognize that many vendors do comply with the law, who aim to supply safe Kratom products and want to increase consumer satisfaction.

For example, a positive review by Trish Richards was rare and is hardly taken into account by those who are so against Kratom.

Even departments like the Troy Police in Michigan have taken a very firm position against Kratom.

They described it as a “dangerous product” and want to arrange seminars to demotivate people from consuming it. A judge, Maureen McGinnis, also spoke against it.

The FDA warnings have pressured politicians to take a strict stance against Kratom. These politicians are supposed to cater to the public and especially to those who voted for them.

But because of the nature of politics and because they don’t want to risk their reputation and lose the next election, they find it easy to stand against Kratom.

The mentioned reasons were, probably, what motivated the Senator to take this stance.

Another factor that hinders the legality status of Kratom is the fact that some states have made it illegal. These states are; Washington, Alabama, Arkansas, Indiana, Vermont, Rhode Island, and Wisconsin.

Hence, people who are against Kratom always cite these states as support for the argument that Kratom should be banned.

They say, if these states have banned it, then there must be something wrong with the substance. After all, it is better to be safe than sorry. And these States would not have banned it without good reason.

But what these people don’t realize is that there are also states that have made Kratom legal.

And there are even more states that are contemplating making it legal and have introduced relevant legislation to regulate it.

The States that regulate Kratom are Arizona, Nevada, Georgia, and Utah. They have enacted the Kratom Consumer Protection Act that is currently being debated in Michigan.

Kratom is considered to be one of the best alternatives to opioids, which can lead to harmful effects, like death and addiction.

According to the CDC (USA Centers for Disease Control and Prevention), opioids have killed around 47,000 people in the USA and about 2,033 people in Michigan.

Furthermore, researchers from Johns Hopkins and the University of Rochester Medical Center have also mentioned that Kratom is a good substitute for opioids.

There is the possibility that the Drug Enforcement Administration (DEA) may be in support of Kratom.

In 2016, the DEA intended to include Kratom in the Controlled Substances Act. The result would have been to make the use and dealing of Kratom illegal.

However, they later retracted this intention. Instead, they opted to wait so that further research can be conducted, and definitive results can be produced.

The retraction was also due to the backlash by many physicians, scientists, politicians, and other advocates.

Many advocates for the support of Kratom and this highlights that the product is successful in its aim if appropriately used and bought diligently.

For example, around 50 members of Congress and 11 Senators were against the banning of Kratom.

The fact that several million people in the USA (according to the New York Times and The American Kratom Association) use Kratom further adds on to the argument.

Various authorities are in support of Kratom. For example, The American Kratom Association is a reputable organization that continually advocates for the legalization of Kratom.

Moreover, the International Journal of Drug Policy has also said that Kratom is a successful product for pain relief.

Even the CDC admitted that the role of Kratom is unclear when it came to the 91 deaths reported. This was because of the presence of other drugs in tests.

The FDA encourages people to check lab tests conducted by the vendor from whom they are buying Kratom. If lab tests have not been made available, the next course of conduct should be to demand lab tests.

The vendor, aside from conducting lab tests, could have a strong partnership and collaborations with the American Kratom Association.

They could also comply with the GMP standards, which further add on to the safety of the product.

These factors ensure safe usage and highlight a commitment to consumer satisfaction by vendors.

Where Can You Buy Kratom From In Michigan?

There are many forms of Kratom offered, such as capsules, tinctures, shots, extracts, and powder. And all these forms are legal in Michigan.

Kratom can be bought in smoke shops, herb stores, and gas stations. The best prices and quality are available online. Original Harvest Kratom and Smoke Shop Kratom is a famous vendor.

However, reviews of Smoke Shop Kratom indicate that the prices charged are incredibly high. The largest retailer in Michigan is Detroit Smoke and Vape. Other famous vendors are; Vape Hut Kratom – CBD, Smoker’s Alley, and the Tobacco Republic.

These vendors have great reviews, indicating excellent customer service and high-quality products. The above guidelines should be followed when buying Kratom.

In conclusion, there are many pre-conceived or biased notions about Kratom. And while it is human nature to be careful, one should not be so quick to classify Kratom as dangerous without proper research.

There are many benefits to Kratom and many success stories that can’t ignore the fact that it may be a safe and excellent product.

Can You Take Matcha Powder For Energy? – Best Matcha Products

How To Make Salvia Tea Step By Step