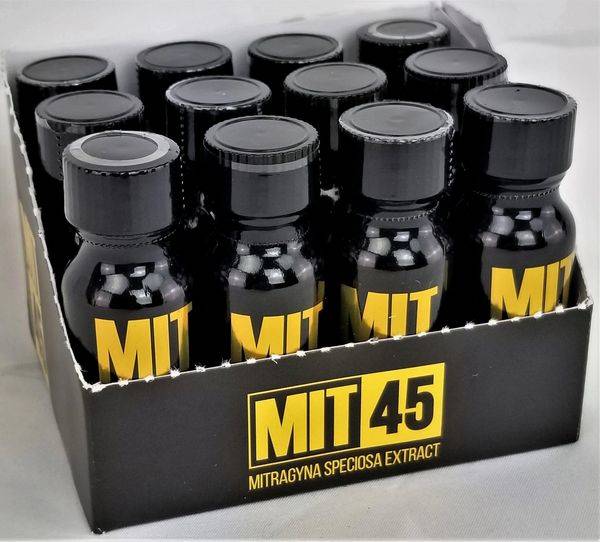 While kratom has been in use since the 19th century, MIT 45 Kratom is a modern innovation. When it first came to market, news about it spread like fire, and it was one of the most successful kratom products. But what’s so special about it?

In this article, I’ll explain to you what MIT 45 Kratom is and how it works and what you can expect if you try it. I’ll also discuss whether it’s safe to use and where you can buy it.

By the end of the article, you’ll hopefully understand why MIT 45 Kratom is so special and if it’s right for you. Let’s begin.

In January 2018, a kratom company called South Sea Ventures launched an extract called MIT 45 Gold Liquid Kratom. News about the product spread like fire throughout the kratom world, and reorder rates for extract soared to as high as 96% within months of its release.

But what was so special about this extract? Kratom extracts are released all the time and are easily available online. Here’s why MIT 45 Gold Liquid Kratom is different than ordinary extracts. 45% of it was mitragynine. Yes, you read that right.

Mitragynine is the major alkaloid found in kratom — it makes up 2/3rds of the alkaloids. Normal kratom products contain 1 to 2% mitragynine. MIT 45 Kratom takes it to a whole new level. If you’re wondering why mitragynine is so important, here’s a quick walkthrough.

Your body has molecules called opioid receptors. Certain chemicals found naturally in your body bind to these receptors and activate them. When activated, these receptors turn on a wide range of physiological responses like sedation and analgesia.

One great example of how these receptors work is when you are playing a sport, and you get a cut. But the cut only starts hurting long after you are off the playing field. Why? Because the body’s analgesic system got activated to allow you to focus on the game, and once you were done, the body allowed you to experience pain.

Kratom owes its effects mainly to mitragynine. It works the same way as the body’s natural opioids and binds and activates opioid receptors. This is why mitragynine is so important — the higher its concentration, the more potent the effects. Now you can see why MIT 45 Kratom got so popular — it is extremely potent.

MIT 45 Gold Liquid Kratom got so popular that the company soon launched the same extract in a capsulated form. This was a brilliant idea because a lot of kratom users look for an easy way to take kratom. Because the MIT 45 Gold Kratom is very potent, beginners were hesitant to use it. So, the company launched a diluted version of the extract called MIT 45 Silver Kratom. Not only was this diluted but also cheaper, making it perfect for beginners.

Although MIT 45 Kratom got popular because of its mitragynine concentration, it still has other kratom alkaloids in it. These include chemicals like hydroxymitragynine, speciogynine, and speciociliatine. This is important because if the extract only contained mitragynine, it would not have been called kratom but something different.

Indeed, it is said that the analgesic effects of kratom are mainly due to hydroxymitragynine and not mitragynine. So, MIT 45 Kratom is full-spectrum kratom, meaning it has all the ingredients present in a normal kratom product.

What you can expect from MIT 45 Kratom

A lot of people are curious about how MIT 45 Kratom feels. Well, it provides normal kratom effects, however, more forcefully. This means that a small amount is sufficient to produce strong effects, and larger quantities can be overwhelming, especially for beginners. You can expect effects that include improved mood, euphoria, increased focus, tranquility, and relief from pain.

Based on the experience of a user, here’s what you’ll feel after taking MIT 45 Kratom. As you open the bottle, you’ll find a sweet, herbal aroma permeating the air. When you take a shot, your mouth will go numb, and you’ll experience a very strong taste — especially if you are a beginner. The kratom will kick in instantly, and your entire body will begin to feel warm.

After about 10 minutes, a strong analgesic effect will settle in. And this is great for those suffering from chronic pain. After 20 more minutes, you’ll begin to feel euphoric, and the mood-improving effects will start to kick in. You may also feel intense hunger, and some believe that if you eat after taking kratom, its effects are enhanced. So, you might want to munch on a snack. Finally, after about 2 hours, a general feeling of calm and tranquility will settle upon you, and you can expect this to be the major long-term effect of MIT 45 Kratom.

However, please note that kratom experience varies person by person. While this a general outlook on how you might feel after taking MIT 45 Kratom, your actual experience can differ greatly. The only way to find out how MIT 45 Kratom would work for you is, well, to take it.

Kratom toxicity is rare, but it has been reported. Between 2011 and 2017, poison control centers in the USA received about 1800 reports about unpleasant kratom effects, and a lot of these reports included death. About half of these reports involved serious adverse effects like seizures and increased blood pressure.

Therefore, you can expect a similar side-effect profile from MIT 45 Kratom but only if taken inappropriately. I haven’t heard of toxicity episodes arising specifically from MIT 45 Kratom, but if the rate were higher than normal kratom, the product would not have done so well (remember, it had a 96% reorder rate within three months of its release). If it wasn’t safe, all these people wouldn’t reorder it, would they?

But of course, since MIT 45 Kratom is extremely potent, I would suggest you to be careful with it. You should be extra careful if you are new to kratom because potent kratom extracts can induce significant kratom dependence. And this is one reason why some kratom companies don’t sell kratom extracts.

Where you can buy MIT 45 Kratom

If you’re already excited to try MIT 45 Kratom, I understand you. While the product was meant to be sold in smoke-shops and large high-volume retailers, several online vendors are now selling it as well.

If you prefer taking kratom capsules, visit nuwavebotanicals.com. You can buy capsules of 7.2 oz MIT 45 Kratom for $192, and 72 oz capsules for a whopping $1800.

Yes, MIT 45 Kratom is expensive. If you are looking for a cheaper alternative, you can try MIT 45 Silver Kratom, which is also available as both liquid and capsules. At karmaganics.com, one bottle sells for $9.99, but right now, it’s on sale and sells for $5.99. So, hurry up! The company also sells MIT 45 Silver Kratom capsules.

But remember, a Silver version is a diluted form of the Gold version. So, while it’s cheaper, it’s also less potent. This makes it great for beginners!

MIT 45 Kratom is an enhanced kratom extract with 45% mitragynine. Because of its high alkaloid concentration, it’s very potent, and I’d suggest you to be careful with it, especially if you are new to kratom. But hey, users seem very impressed by the product, and it’s one of the fastest-growing kratom products. So, if you’re looking for something extra, go try it out!

How Long Does It Take To Detox From Kratom?

Bridgetown Botanicals Review – How Good Is This Vendor?

How Long Does It Take For Mushroom Tea To Kick In?