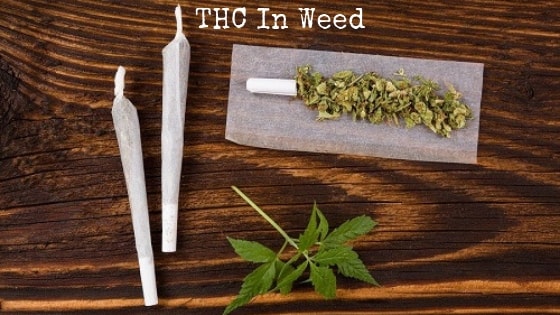 Tetrahydrocannabinol is the main constituent in cannabis that leads to euphoria. It is often linked to twisted mental capacity. The compounds chemical formula C21H30O2 may sound naturally beneficial, but it has its downsides.

The chemical compound typically connects with the cannabinoid receptors in the brain that acts as a signal transmitter for pleasure.

These receptors get altered by affecting brain coordination, decision-making, and other vital thinking processes. THC is secreted by the cannabis plant and has psychotic effects.

THC seems all harmful but, this hazardous compound has its benefits too. Imagine gaining the roses from a bed of thorns towards the end. The rose is more valuable than the hazards.

Synonymous to this is the use of cannabis, pot smokers pay tribute to the medicinal effects and positive aspects of THC.

What Is Inside This Psychoactive Weed Compound?

THC is a natural altering tool. It tricks your mind into inducing a pleasuring sensation. It is like fooling a bull into a trap with red cloth; wherein, the bull is your feeling, and the red fabric is THC.

It deceptively hits your brain cells to give you a pleasurable vibe. Nature works in ways that go beyond human comprehension. These psychoactive compounds can go a long way in altering your state of mind and how you process information and minute details.

THC induces the brain cell to release dopamine, the same chemical that is produced after having all the basic human necessities. The effect of this chemical resulted in euphoria and hyped thinking.

THC often goes beyond this natural reward system of dopamine to induce this heightened sense of joy. The “bliss molecule” is responsible for increased brain activity that contributes to elation.

Anandamide was discovered by researches in 1990 that was a molecule released by the brain when THC is consumed. The molecule is like a natural Xanax, and it is a form of anti-depressant and the anti-anxiety pill. This joy-inducing molecule affects a smoker’s appetite and fertility.

Anandamide is responsible for how the brain processes pain, movement, and memory. Do you think you have found the jackpot?

You’re mistaken as this molecule does not last long in your bloodstream as it is a neurotransmitter. THC with this molecule binds quickly to form this heavenly trip to “green-land.”

Furthermore, THC is like fatty tissue which ends up in all the organs including the brain. THC is broken down in the liver, and its interaction with other drugs may lead to implications.

You may think the world is rosy for pot-smokers. In fact, some smokers have naturally occurring fatty acid amide hydrolase enzymes that disrupt anandamide and causes anxiety.

Excessive use can also cause depression. These smokers are in a relaxed mood but, this chemical imbalance may wreak havoc for their system.

THC may often be a thorny garden of roses as well, as it may induce the biphasic effect. A particular hit of this drug may give you pleasure, while a changed dose may make you uncomfortable.

Terry Necco in his book “Marijuana and Sex: A Classic Combination” explains cannabis:

Just as our bodies contain pleasure systems which reward us for sex; our brains contain neurocellular circuitry which can only be activated by substances with THC’s molecular structure.This makes the marijuana high a unique constellation of feelings, and there are only two sources for the substances which activate THC’s very own neuroreceptor.Our brain is one source: it generates a neurochemical very similar to THC, called anandamide…The only other source for this bliss-producing substance is the cannabis plant.

Which Strains Are High In THC

Cannabis strains are either pure forms of the cannabis plant. At the time it is a mixture to form a hybrid. This method is used to design a drug for a specific taste or a pot smoker.

Some strains have characteristics unique to them and specific to marketing purposes. These are differentiated by color, smell, taste, or THC quantity.

Some strains are higher in THC percentage compared to others to give you the kick that you need. Here follows a detailed list and explanation to get you hooked.

The undisputed royal gorilla has been known to have potency greater than 30%. It makes itself well recognized in the pot-smoking community.

Craving for some high? Get the fix with some royalty. Its composition contains Sour Dubb, Chem Sis, Chocolate Diesel. Royal has 50% Sativa, 50% indica with none ruderalis.

Then comes the Fat Banana that packs a punch of indicia. As the name suggests, it is also big on THC content, ranging from 25%-27%. The constituents are banana and OG Kush.

The next is Amnesia Haze Automatic which is a friend for a beginner. It is a useful tool for professional user and grower. It is synthesized with mixing amnesia and ruderalis, which gives it a unique vibe. Combining two flavors in one sound out of this world.

Well then, Blue Cheese Automatic is the strain everyone is looking for which can be harvested in 10 weeks. It has 35% Sativa, 40% Indica and 25% ruderalis. This contains a little 16% THC.

The last two in line are Royal Highness and Dance World. Both of these have 14% to 12% THC potency and live right to their name giving you an overhauled experience of pot smoking.

Just as much THC may send you on a trip to the skies it may prove beneficial for you.

Everyone must be wondering how an illegal drug may be beneficial. Ironically the society deems the beneficiaries wrong so get to know what people are missing on.

According to most recent clinical studies on cannabinoids, 2010-2014 showed that THC helps with chronic pain and could prove vital for those in excruciating pain (it’s time to ditch your paracetamol).

A study in 2011 showed a chemical similar to THC with a lesser potency which proved curative towards nausea and vomiting.

Furthermore, it also keeps your brain sharp as it enhances your brain cells. It is a neuroprotectant, and a study in 2014 showed that 8 out 10 people that smoked THC were less likely to die from severe blows to the head.

The chemical compound can be used in multiple facets which often includes improvement of sleeping cycles and PTSD.

Both of these are linked to anxiety and depression, which can be cured by a standard dose of the pot smoke.

THC may often seem to affect the brain adversely, but it turns out as it is responsible for heightened senses. It is so useful in enhancing senses that religions and cultures across the globe. They have used it to induce a sense of focus and unity in their ceremonies.

It is also antioxidant. All the oxidant stress is released, and you can relax.

The most crucial and surprising benefits of THC may seem a no-go for smokers. It is known to be a bronchodilator which may help improve lung condition of tobacco smokers.

It may sound paranoid about the idea where weed itself is smoked with tobacco then, how can THC be used to improve lung health.

Certain terpene named is a scented molecule that enhances lung functionality and paves your way to a more evident breathing tract.

THC is a molecule that may not all be rosy for smokers. It has its fair share of downsides to it. Some effects are short term, and others are long term.

The short-term problems include short term memory loss, anxiety, and hallucinations. All of these feelings and occurrences are interlinked. The alteration of the brain’s chemical composition may lead to altered brain response to different situations.

Simpler things may seem confusing and daunting. The fear of the unknown and panic may loom over the smoker sending them into a dark and gloomy state. Paranoid ideas and feeling of loss of control take the victim in its control.

In an experiment by Thomas (1996) showed 15% of cannabis users heard and felt weird distracting noises. Talbott and Teague (1969) showed 12 soldiers in Vietnam under the influence of cannabis showed impaired vision, lack of control and confusion.

This idea was proven in 1974 when 200 patients after use showed disorientation, confusion, and paranoia.

Cannabis in high doses may make you feel toxic and alter your brain functionalities.

Furthermore, cannabis users are at a higher risk of heart stroke and have a lower reaction time. These health issues make cannabis a plant to be afraid of. Acute schizophrenia with toxic psychosis may be caused by consumption of THC.

A study in 1972 by Tennant and Groesbeck showed that almost 16% of cannabis users had developed acute schizophrenia.

Cannabis on the long term can decline IQ and show poor concentration skills.

Furthermore, it is a hurdle for improved relations as it is a form of addiction and can often be a hurdle for another daily human life. It makes a person anti-social and usually goes into a “social-withdrawal” stage. Pot-smokers generally are less satisfied with life and tend to get obese.

The case of legalizing THC across the USA has been one from decades. It is rather complex than a straight-forward debate. Legalizing movements have been pointed at medical use.

There are other elements of the society that believe that legalizing recreational marijuana would be a positive move.

The argument is backed by the idea that legalizing it would ensure control and safe use. Even the government would benefit by collecting taxes, a source of the national treasury.

However, critics feel that the drug may have a devastating impact on future generations. It is also believed that leniency with any drug would lead to widespread drug addiction.

For the USA’s federal law growing cannabis, cultivating, supplying, and buying marijuana is an offense. Yet, there are certain states that have legalized medical and recreational marijuana.

Federal law declared cannabis illegal, but it allows the use of some of its derivatives with a prescription. The use of THC in the USA has gained popularity. This growth of pot smokers will revolutionize how we look at THC.

These changing trends are bringing a new tide of acceptance. Yet, there is a long way for THC to go before it becomes a household product.

THC in weed may have some benefits but, in the end, it is known to be an illegal drug which has its downsides which eventually affect human health and capabilities.

It is a matter of personal choice and should be used responsibly in moderate amounts without causing one’s health to deter. Drugs taken as an overdose can prove fatal or have short term and long-term effects.

CBD Chocolate: Is It Effective Or Just A Marketing Hype?