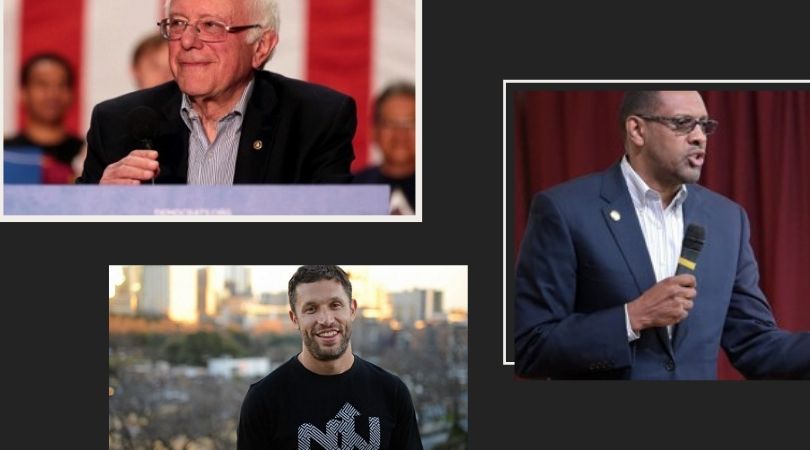 Bernie Sanders is the longest-serving independent in U.S. congressional history and a member of the Democratic caucus. In August 2016, the Drug Enforcement Agency (DEA) published a “notice of intent” in the Federal Register stating its plan to list the natural herb Kratom as a Schedule I substance.

However, one month later, in September, two letters from a bipartisan group of 11 U.S. Senators – including Sanders and Orrin Hatch – urged the DEA to halt the proposed ban on Kratom and to allow for expert and public input. This resulted in the DEA withdrawing their ban on Kratom.

“As you know, Schedule I … is reserved for substances that have a high potential for abuse and that have no currently accepted medical use.

An increasing body of research has shown Kratom’s potential value as a treatment for a number of conditions.

On September 2, 2016, eleven scientists from well-respected research institutions in the U.S. wrote an open letter to Congress expressing “grave concern” about the agency’s proposed action and expressed their opposition to any efforts to designate Kratom as a Schedule I controlled the substance of the CSA …”

“Given that we are in the midst of a drug crisis and there is promising evidence from the research of Kratom’s potential medical benefits, including the possibility of new, safer medications for the treatment of pain, we believe that placing Kratom in Schedule I without adequate time for experts to weigh in via public comment may have unintended consequences.”

Although Sanders is not necessarily a promoter of Kratom, he sympathizes with the over 5 million users of Kratom across the US. He also recognizes the potentially life-saving properties of Kratom.

As a democratic socialist, it came to no surprise that Sanders cares more for the general public than the revenues of big pharmaceutical companies.

Dorian Yates was the world’s top bodybuilder in the 1990s, surpassing even the great Arnold Schwarzenegger. He won the Mr. Olympia title six consecutive times from 1992 to 1997. In a famous podcast with UFC broadcaster Joe Rogan, the six-time Mr. Olympia spoke extensively about his use of weed and other substances.

“A lot of the guys I talk to are nervous to be seen or speak out about it because they think it might upset a sponsor.

One of the guys I was talking to said, ‘I can’t let anyone know because I’m involved in a charity with children.’ It’s ridiculous. Could you not be involved in that charity anymore if you had a glass of wine? Older generations have this view that’s been given to them by the media. F*** it, man—I believe it’s a very beneficial medicinal plant.”

As part of his training regime, he smoked marijuana regularly and claims that among the sixty supplements he takes (fish oil, vitamins, amino acids, etc.) cannabis CBD oil is more valuable than all the rest put together.

Smoking weed with THC allows Dorian to get a better workout, because it dilates the bronchioles, allowing for better oxygen uptake, as well as improve dead-eye focus.

But over time, as his testosterone levels dropped and pain started to kick in, he turned to Kratom for an extra kick in energy levels, pain relief, and reduction in inflammation. While training in Canada, he turned to a company called Canada Kratom Express (CKE) for his Kratom requirements.

Joe Rogan is an American stand-up comedian, commentator of the Ultimate Fighter Championship (UFC), podcast host and former actor and television host. On numerous episodes, he promoted the benefits of Kratom on his friendly podcast “The Joe Rogan Experience.”

On this podcast, Rogan explained why Kratom is not an opiate, why the FDA has a secret agenda to ban Kratom and the positive effects of Kratom in his life.

While Kratom has opiate-like effects, it isn’t actually an opiate. Leading scientists have agreed that while Kratom activates the same brain receptors as opiates and has similar effects, it is gentler and has a much lower risk of addiction.

Despite this, the FDA has labelled it an opiate for ammunition to schedule it as a Schedule I drug. Since almost 75% of the FDA’s budget comes from big pharmaceutical companies, the agency has a secret agenda to keep natural supplements like Kratom off the hands of consumers.

Rogan shared his views about this topic on Twitter. The point is, big pharmaceutical companies don’t like it organically-grown plant products because they want you to buy their pills for pain relief.

Rogan also shared his personal experiences with Kratom on the podcast, illustrating how the plant provides “a mild stimulant effect — similar to a cup of coffee”.

He also discussed how he was able to “function perfectly and even lift weights” after taking Kratom. Among online communities, Kratom is known to provide energy, mental clarity, and increase a person’s productivity.

Aubrey Marcus is an experimentalist, unconventional fitness junkie, and human optimizer. He is the founder and CEO of Onnit, a lifestyle brand based on a holistic health philosophy he calls Total Human Optimization. He is also a New York Time’s best-selling author.

In 2018, Marcus got into a major car accident that required facial reconstructive surgery. Throughout the recovery process, he claimed the most difficult things he had to manage were inflammation, low-energy levels, and pain.

The doctors prescribed him ibuprofen, Oxycodone, and Tramadol—a combination that he realized was built for failure. Ibuprofen (or Advil) is often used for quick pain relief, but damaged his stomach overtime and led to even further inflammation.

Oxycodone, he claimed, was used when he really needed to relieve the pain. He thought Tramadol was the best solution since it has the same active ingredient as Kratom, just concentrated and standardized into a pharmaceutical.

But Marcus quickly learned that with Tramadol, he would have troubles sleeping. This required the help of Xanax to help himself sleep.

Basically, he went through a cycle of testing out different pharmaceutical drugs. Until he found kratom.

“As soon as the pain was manageable I switched from Tramadol to Kratom, as I always prefer the natural method over the pharma if possible.” Since then, he has been a big supporter of Kratom and continues to use it daily.

Vernon Jones is an American Democratic politician from the US state of Georgia. Jones was CEO of Dekalb County where he managed a $2.6 billion operating budget.

Near the end of his tenure, he began having experiencing chronic pains. Jones says Kratom was a life-saver during this period. In a statement to the Louisiana House of Representatives, he shares what has been studying and consuming the Kratom for the past 12 years.

“For me, it helps me. I feel healthy, I run, I work out. I don’t feel aching in my bones, I’m getting older. For some in their minds, it helps them.”

Jones says his email inbox is flooded by personal success stories with Kratom from users across the nation. While Kratom remains a controversial topic, Jones says if there is going to be legislation, then it needs to be done in a way that’s responsible and for the good of people.