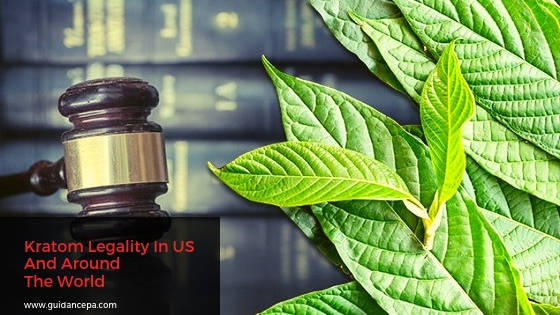 Today, Kratom is legal in most of the US states, but due to an addictive nature, it is banned in Australia, New Zealand, UK, Malaysia and few European countries (Denmark, Sweden, Poland, Romania, Lithuania and Latvia).

The Kratom legal status remains bumpy in the United States, and it’s difficult to track in which state it is legal or not.

As people grew interested in the natural supplement, there was an increase in the different material that was published, spread and transmitted so that people stop using Kratom.

The truth is that since Kratom acts as an opiate, it can be used instead of harmful pharmaceutical medicines to feel better.

This natural supplement was affecting the pharmaceutical industry in many ways; therefore, we saw an increase in propaganda against the use of Kratom.

However, this gave rise to the American Kratom Association, which works on behalf of lawmakers, doctors, and users to protect the legality of Kratom by proving that it is not harmful or lethal, as claimed by many false sources.

Also, the Botanical Education Alliance is also an organization that helps users, lawyers and doctors learn about various natural and organic supplements that can replace modern medicines to ensure wellbeing without any long-term side effects.

The organizations as mentioned above and the experience of millions of people is enough for the government and lawmakers to understand that Kratom is not dangerous, but is, in fact, therapeutic and energizing if appropriately used.

In the 1900s, Americans were not aware of Kratom; therefore, it was a different element that was heard of but never used locally.

Gradually, Kratom made way to the country, and several people tried it successfully. It became a popular supplement, but due to the misinforming agents, many were apprehensive about its benefits and believed the wrong information.

Kratom Legality In US States

The natural supplement Kratom is being used in the United States for several decades, but the health authorities have not been satisfied with it. They think it is a complex substance and requires more clarity before being openly declared beneficial.

During 2005 to 2015, there were reports of poisoning from Kratom, due to which the government restricted the use of Kratom, and FDA confiscated the imported Kratom.

The U.S. Army prohibited soldiers from using Kratom, and the states of Alabama, Arkansas, Indiana, Vermont, and Wisconsin banned Kratom.

According to the International Narcotics Control Board, there was massive import into the United States from 2010 to 2016, and the Drug Enforcement Authority (DEA) categorized Kratom as a risky supplement and unfit for use.

The use of Kratom was restricted, and this led to protests from people and legislators due to which the use of Kratom was allowed in all states except Alabama, Arkansas, Indiana, Tennessee, Vermont, and Wisconsin. Many other states and cities are also considering imposing the ban again.

It is entirely legal in these US states:

In all the remaining and unmentioned cities or US states, Kratom possession, cultivation, use and trade is completely legal.

Kratom Legal Status Around The World

Kratom is a South Asian evergreen tree that is from a coffee family but considered like an opiate. This tree of the coffee family became a popular means for pain relief and sedation long before pharmaceutical medicines became available in the market.

The sedative and energizing effect of Kratom made it a favorite among the people of Southeast Asia.

When opium became expensive, and people started using Kratom in the early 20th century, the Thai government passed the Kratom Act 2486 in 1943,, according to which using and even planting Kratom was illegal.

The government of Thailand labeled Kratom and marijuana as the last category of the five-category narcotics classification in 1979.

In theory, there might be not enough proof of the benefits of Kratom, but the users claim that it serves the purpose of opiates and helps them stop the usage of medicines that have severe and irreversible side effects.

For several decades the status of Kratom remained the same, and the government was strict with people who possessed this supplement.

Due to the feedback and demand of users and the research that proves Kratom is not a narcotic, the Thai government legalized the plant for medical use in December 2018.

Now the people can possess, import or export and even grow Kratom freely. This allowance came as a Christmas Day celebration and the people welcomed it.

Kratom is a magical natural supplement as it gives the users exactly what they are looking for. A small dose of Kratom can energize and refresh the person, while a more potent dosage can provide pain relief and sedation.

Many people find it odd that Thailand banned Kratom since it is the origin of this plant. Yes, it is strange especially when it was a part of century-old medication that was available as a pain killer until it was prohibited in the early 1900s.

Contrary to common belief, the ban of Kratom was political and not due to the plant’s effects on users. The government changes and political unrest in Thailand in the 1930s caused a rise in the black trade of opium.

When the government took over this trade and levied taxes on opium, people looked for a cheaper and readily available alternative.

Kratom use increased and then the government banned it. Nobody could grow, possess or use this plant. The punishment for Kratom possession was strict, and people obeyed the law for many decades.

Several countries allow Kratom usage, but there are still a lot of countries where Kratom is prohibited up till now.

It is ironic that Kratom is still banned in countries of its origin. Being a South Asian native plant, Kratom is illegal in many Asian countries. The Association of South East Asian Nations (ASEAN) has banned the plant use and possession.

Except Thailand, all Asian countries are strict about Kratom usage and have declared it illegal.

There are several small countries where there is no regulation on Kratom, thus making it a grey area for consumption, possession or trade of Kratom.

In Europe, we see a more liberal trend among the major countries.

Top Brands For Buying Kratom With A Credit Card

Information Parents Should Have About CBD Usage In Children