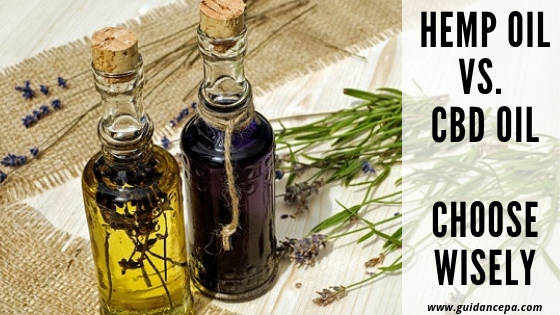 The cannabis world is full of benefits and recreation, but it holds a plethora of confusions. One of such complexity is whether CBD oil and hemp oil both the same thing? Or are they any different?

Well, to tell you the truth, I belong to the industrial world and possess enough knowledge about the cannabis plant, but still got puzzled and bought hemp oil when I actually needed CBD oil. It was then that I researched more about it and came to know about the key differences between both.

So, before moving to the details, let’s clarify one thing in mind that yes they both are different products.

That what is the apple of discord! They both have the same origin, i.e. Cannabis plant. Now, you must be thinking about how they can be different when they come from the same plant, right? Well, that’s an interesting question! Let me tell you!

The Cannabis plant has three specie including Cannabis Sativa, Indica, and Ruderalis. We are not interested in Ruderalis, so we’ll deal with the first two. Both hemp and CBD oil are derived from Cannabis sativa; however, some hemp oil might be extracted from Indica.

Again, what’s the difference then? There still remains the same question! The answer is they both come from different strains within that specie. The strain from which the hemp oil comes from is deficient in cannabinoid count.

However, that of CBD oil comes from a strain that is rich in CBD and also has some THC.

Moving ahead, the parts of the plant from which they are produced are different. Hemp oil comes strictly from the seed of hemp plant while that of CBD oil is extracted from the leaves, stalk, or flower.

The hemp seed is very low in cannabinoid content; hence the hemp oil isn’t psychoactive at all because it contains just the trace amount of THC. However, that of CBD oil contains some amount of THC.

That’s because the leaves, flower, and stalk of the plant has some amount of THC, and so has the cannabis Indica specie.

However, THC being the key psychoactive compound still holds some legalization.

The hemp-derived CBD hasn’t any restrictions and is declared legal throughout the U.S.; however, the marijuana-derived CBD is illegal in most of the states.

Despite coming from the same plant, both CBD and hemp oil are extracted via separate processes. Different parts of plants have different requirements for extraction.

As mentioned earlier, CBD oil comes from flowers, leaves, and stalk of hemp (cannabis sativa) plant. Therefore, the oil and CO2-based methods are the safest for pulling out the ingredients down there. The oil-based process uses a carrier oil (hemp or olive) to isolate the components.

However, the second one is a highly-engineered method as it requires a specialized plant. The technique requires the plant to be placed under a required high pressure. This method is used by larger-funded operations and produces the purest form of a product.

On the contrary, the hemp oil (that is rich in vitamin E and fatty acid) is extracted via the cold pressing method. This isn’t really hemp-specific extraction method and pretty much resembles the extraction method of black onion seed oil.

First, the seed is de-shelled (outer crust is removed), and then the rest is dealt with some chilling and squeezing.

Well, that’s what makes all the difference! The hemp oil, being the lowest in THC, doesn’t possess medical benefits. THC, despite being highly psychoactive is known for its medicinal benefits (when used in a specific amount) under some conditions.

Having said that, you can’t use hemp oil when you have health issues. Well, that isn’t entirely true because it has high nutritional benefits.

“Prevention is better than cure” as they say, then why go for treatment when you can improve your nutritional value in the first place? It’s a complete package of fatty and amino acids and has a high level of antioxidant vitamin E.

Moreover, its low saturated fat content makes it a must-have kitchen item, and its branded items can be used for salad dressings as well.

The taste may be nutty or grassy, depending upon the process it is refined. Other than that, its high vitamin E and fatty acid content help guarding a body against cancer-causing elements.

Therefore, it’s used in a lot of skin products such as soaps, shampoos, detergents, etc. The uses don’t end here! The hemp oil can also be used for fuel, plastics, and as a base element of non-petroleum paint product.

That’s what makes its therapeutic properties an “Entourage Effect.” A lot of CBD and some THC in CBD oil pretty much makes it a drug for treating psychological problems, epilepsy, cancer, and inflammations.

Additionally, it can also be used as a recreational product as CBD hinders the acceptance of THC; thereby giving you a calming effect without making you high.

As mentioned earlier, the THC-free property of hemp oil makes it legal throughout the United States.

Having said that, its purchase is as easy as buying a mundane-used grocery item. You just have to step into a nearby store and buy it straight away. Moreover, you now have feasibility of buying it online.

However, you require an authentic medical prescription to buy CBD oil since its legalization laws are complicated. You can buy it from a licensed producer only when you have a written order from your doctor.

There are some age restrictions to the buying process as well, so beware of that, too!

Now, Which One Should You Buy?

After knowing key differences, the question that arises in most people’s mind is which oil is better?

Honestly speaking, both are the best, but that depends on your need. You should buy one according to your requirement to get the best result. For that, read the uses of both mentioned above (that’s your area of interest).

Don’t bother where it comes from and how is it extracted as it is just for your understanding. If you want to increase your nutritional value, then go for hemp oil right away.

However, don’t think twice for buying CBD oil when prescribed by the doctor for treating some severe health issues. So, are you now clear about the underlying differences between both? Can you easily differentiate them now?

How Much Does A Zip Of Weed Weigh & Cost?