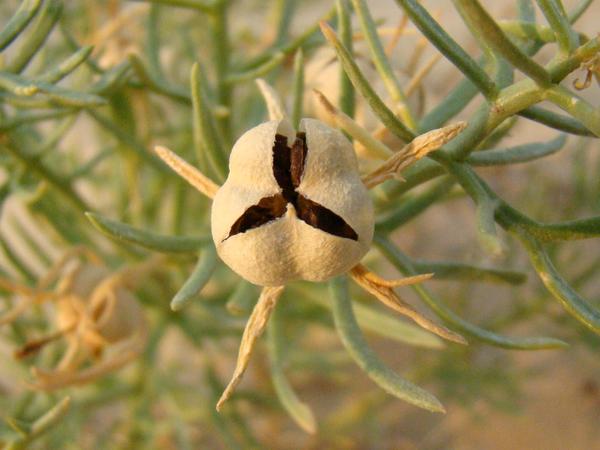 Commonly referred to by its Latin name, the Peganum Harmala is widely known among the medical research community due to its numerous health benefits. Some of its other popular labels are Asfand, Harmal shrub, Wild rue, African rue, Ozallalk and Steppenraute.

The Syrian Rue gained its origins from Central Asia, where people revered it as an aphrodisiac. It also grew around the coastal areas of the Middle East, Africa, and Europe. Because of its use as a sedative and stimulant and treating chronic sadness, the herb has invaded the United States in recent years. This article will discuss the effect of Syrian Rue on health in detail according to past and current research.

Belonging to the Nitrariaceae family, the Syrian rue is a perennial, herbaceous shrub that cannot survive in winters. However, its roots survive the harsh climate and allow regrowth of the plant in the following year. The lateral roots can invade the soil up to 15cm deep and steadily anchor the plant.

The mature plant can grow up to three feet tall, but it is around one foot tall on average.

The stems branch heavily and are stiff, whereas the leaves are narrow, bright green, and fleshy, arranged in alternating patterns. The small, solitary flowers can be found in varying shades of white and yellow and are usually made up of five petals with visible green veins.

The fruit of the Syrian rue grows within a capsule that is green-colored when unripe and adopts a red-orange color as it ripens. The leathery capsule is 10-15 mm in diameter and opens through three valves that contain numerous dark brown to blackish seeds with distinct odors. The entire shrub is considered toxic and a noxious weed because of its bitter taste and ability to kill livestock when consumed.

The two most potent constituents, Harmine and Harmaline, are majorly responsible for the inhibitory effects of the plant. Both Harmine and Harmaline temporarily block an enzyme, leading to increased chemicals in the brain, creating a prolonged state of happiness. Hence, this is the basis of their use in treating chronic sadness states.

Effects of Syrian Rue On Health

The different parts of the Syrian rue, including its seeds, leaves, and roots, are commonly used along with modern medicine. The psychoactive plant was often used in ceremonies and religious rituals in ancient times. However, it is actively used to aid the treatment of several diseases and ailments nowadays.

According to a study published in the European Journal of Pharmacology on 15th December 2010, Harmine, an active constituent of Peganum Harmala, has long been used in folk medicine to treat various cancers by decreasing the formation of new blood vessels.

The use of Syrian Rue and its components in pain relief was researched in another study published in the Journal of Ethnopharmacology on 12th February 2008. The research highlighted that the extracts of Peganum Harmala have long been used as remedies for a variety of painful states involving different parts of the body.

Many consumers also use Syrian rue to experience joy, euphoria, and un-inhibition because of its stimulant properties. A study published in the European Journal of Pharmacology on 25th May 2010 showed that ingestion of the active agents in the plant led to profound behavioral effects in consumers.

Peganum Harmala is also used to treat states of chronic sadness along with a wide range of mood disturbances. This is because it blocks biological enzymes and increases the presence of certain chemicals in the brain that promote prolonged states of happiness and contentment. These findings were supported by a study published in the journal of Neuro-Psychopharmacology and Biological Psychiatry on 13th November 2009.

The toxic nature of the plant allows the use of the stem and leaves of Syrian rue to end unwanted pregnancies. An animal study published in the Journal of Ethnopharmacology in December 1989 explored that the Quinazoline chemicals within the psychoactive plant were mainly responsible for these growth-limiting effects. These findings were supported by another study published in the Iranian Journal of Pharmacology and Therapeutics in 2002.

When used in moderation, Syrian rue can serve as a revolution in modern medicine owing to its wide array of benefits. However, there are several pieces of research regarding the toxicities of the plant when used in excess. In a study published in the journal of Veterinary and Human Toxicology in 2000, it was discovered that amongst the 56 patients admitted to the intensive care unit, around 7% were suffering from Peganum Harmala toxicity. However, they soon recovered after symptomatic treatment.

A mild increase in body temperature, decrease in blood pressure, hallucinations, vomiting, shivering, and some movement disturbances have been observed with high doses of the plant. However, therapeutic doses are generally considered to be safe.

Do The Negative Effects Outweigh The Benefits

Apart from the detailed health benefits highlighted above, the Syrian rue has been used throughout history in religious and cultural ceremonies. In countries like Iran, the plant seeds are formed into balls and burned as offerings for the Nowruz festival. The locals believe that the smoke takes away diseases and protects them from the evil eye.

In combination with alum and olibanum, the Syrian rue seeds are burned on wedding nights by couples to enhance their sexual activity and increase feelings of pleasure because of their aphrodisiac properties.

Consumers use the plant to enter a trance-like state and achieve a calm state of mind for meditation purposes. Peganum Harmala is also used for baking bread loaves and enhancing its flavor. The smoke is used to facilitate the process of fermentation and modify the taste.

However, even with the multiple benefits accessible to the masses, it is still challenging to decide whether the benefits outweigh the risks. Clinical trials need to be increased, and extensive research needs to be carried out into the therapeutic doses of the plant along with the long-term and short-term effects on consumers. Only then will we be able to reach a satisfactory conclusion.

In most of the US states, Syrian Rue is unregulated and uncontrolled. Since it is not mentioned anywhere on the Drug Enforcement Agency (DEA) website, it is considered an unregulated plant according to the DEA’s laws. Therefore, it can be grown, bought, traded, and sold without any prescription or license.

However, there is an exception in certain states like Arizona, where the plant is considered a prohibited noxious weed and cannot even be brought into the state. In addition, Peganum Harmala has been added to the ‘A’ list of noxious weeds in Colorado, Nevada, California, Oregon, and New Mexico, which has severely restricted its growth, import, and distribution in these areas.

According to international law, Canada counts Harmaline and Syrian rue’s other active chemical constituents amongst scheduled substances. A doctor’s prescription is needed to obtain this plant in Finland, and growth or sale without a prescription is considered illegal. France added Syrian rue to its list of controlled substances from May 3rd, 2005, and according to Australia’s schedule 9, the active agents in Peganum Harmala are considered prohibited substances.

How To Prevent Overdose

Even though clinical research is lacking when it comes to the right amount of dosage of the plant, limited research indicates that Syrian rue is safe when consumed in small doses. While treating chronic sadness, the enzymatic effects are activated by extracting three to six grams of seeds.

Some users chew the seeds directly, whereas others swallow capsules containing crushed seeds. However, the most common method of consumption is through extraction. The easiest way to orally ingest the plant is by making a hot water extract of the seeds, such as through tea. The seeds are added to the water and boiled, and once the liquid obtains a reddish-brown color, the user can ingest the filtered mixture. Be sure to stir in some vinegar or lemon juice to make the tea more soluble.

Side effects of the plant are usually minimized by staying in a relaxed and cool environment that the user considers a safe space. A trusted person should accompany the user while he tries the psychoactive plant. First-time users should start with a low dose and then increase the quantity accordingly. Make sure to maintain a steady intake of water throughout.

In conclusion, Syrian rue or Peganum Harmala is one of the oldest psychoactive plants used along with medicine to cure various ailments. It has numerous beneficial effects on the different body systems, including the brain and heart. However, more thorough research is required regarding the therapeutic doses of the plant since toxicity with higher doses has been observed. Until then, users may continue to use the plant at their own risk, keeping in mind all the information mentioned in this article.

Types Of Weed Edibles You Must Try In 2022

CBD vs. Ashwagandha Which One Is Most Effective