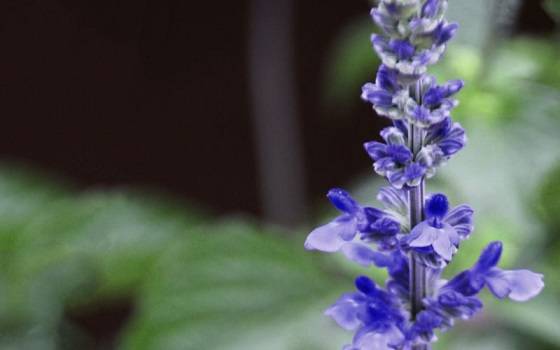 “Monitor the future” survey report shows that in 2011, 4% of high graders, 6% high school seniors used Salvia for getting high.

In the United States, “Salvia Divinorum,” has become widely known due to its psychoactive and hallucinogenic effects demonstrated by some YouTubers.

The infamous Miley Cyrus video while smoking salvia also went viral and people got more curious about this herb.

But the history of Salvia goes is more ancient than that.

Salvia has been used by Mazatec shamans of Mexico for centuries. They use it for religious rituals and festivals, associating its hallucinogenic with seeing deities and visions.

Salvia divinorum is a recreational drug of the mint sage family known for its hallucinogenic effects. Salvinorin A is an active ingredient present in Salvia. It is the most potent natural psychoactive molecule responsible for hallucination, dizziness, false visions, etc.

The amazing thing about Salvia is that unlike other psychedelic drugs, Salvia is not serotonin (the receptors mostly responsible for hallucinations) or alkaloid reactor.

According to the research, Salvia is unique in the sense that it is first naturally occurring non-nitrogenous full agonist k opioid antagonist.

That means it acts on the part of the brain that is related to pain, mood swings, perception of reality, etc.

Salvia is not a toxic substance which is why it is not strictly illegal in the U.S. However, several states have questioned its legality and the legal state of Salvia varies from state to state.

How Salvia Does Affects Your Body and Brain?

The effects of Salvia on the body are not that pronounced compared to the psychedelic effects. Different users react differently depending on the method of ingestion.

Some of the physiological effects are:

Users with heart conditions or high BP should be careful while using Salvia because the high dosage can lead to cardiac arrest or stroke, according to medical professionals.

Although according to a study by John Hopkins, Salvia wasn’t found responsible for increased heart rate or high BP.

As this drug is hallucinogenic, it affects your brain more than it affects the body.

User experience affects within seconds after taking the drug. And it goes without saying that behavioral changes vary from person to person.

Let’s take a look at some of the psychoactive effects of Salvia:

The method of ingestion also determines the effects of Salvia. It is always wise to use Salvia in the minimal amount because concentrated extracts and high dosage can lead to a “bad trip” even in a non-toxic and non-addictive drug-like Salvia.

The effects of Salvia don’t last much longer.

With limited research sources, the risk and dangers of salvia abuse cannot be determined precisely. What we do know because of insufficient research cannot be ignored.

Salvia divinorum is a drug with a low level of toxicity and low addiction potential. According to the British Journal of pharmacology, Salvia has anti-addictive effects when tested as a k opioid receptor.

More research needs to be done, but Salvia shows a promise to be used as an anti-addictive drug as a rat study suggests.

Salvia is particularly misused by people in their teens because of different reason like peer pressure, stress etc. salvia is an easily accessible drug, unlike heroin and alcohol which is why young people can get dependent on it easily.

The best thing you can do for salvia or any other psychedelic drug addict is to watch out for symptoms. Talk to them, be supportive and spend some time together.

No FDA-approved medicine are available for treating salvia addiction. However, it is always critical to treat the underlying cause that is triggering the need to abuse the drug. Medication such as anti-anxiety, antipsychotics can help them greatly.

Group therapies with an educational session on stress management techniques can also help eradicate the root cause of drug abuse. In individual or therapy sessions, the abuser’s self-esteem and self-pride are boosted so that he can fight the temptation in the future.

Moreover, cognitive behavioral therapy and group therapy can definitely prove useful in this regard.

Salvia users love to experiment with the usage method. If we go far back in the time, Mazatec shamans use to roll salvia leaves in cigar-like shapes. They use to suck or chew the cigar without swallowing it. This way, the drug gets absorbed in the bloodstream directly, and the effects are maximized.

Drinking the juice or holding the fresh leaves in capillary vessels for 20 minutes can let it get absorbed through the mucous membrane into the bloodstream.

Fun Fact: Shamans used to believe that Salvia leaves smashed by the hand of a virgin are bound to be more potent.

For recreational use, a more popular method is to inhale the Salvia through hookah (thanks to Miley cirrus infamous video) smoke salvia cigarettes and chew the leaves holding it inside the cheek.

Over Dosage Of Salvia

As salvia is not a regulated drug substance, there is no strict dosage instructions as to how much a person can consume at one time. Lack of information and research is also not helping in this regard.

One thing we know is that, unlike meth, cocaine and heroin, salvia overdosage is not life-threatening.

Taking salvia in high amounts can cause paranoia, Uncoordinated body movements in which a person can injure himself badly or can attack others.

Moreover, salvia is a mind-altering drug so the psychological effects cannot be ignored. It is better to avoid a drug that is not being researched or studied enough due to which we don’t know the magnitude of its side effects.

No death has been reported yet by the consumption of Salvia, but it is better safe than sorry.

How Long Does the Salvia “High” Last?

Salvia effects are characterized by different stages and “high” a user experience through these stages. After the consumption, the effects start materializing between 20-60 seconds.

In the 2nd stage, you will start noticing the initial effects like pupil dilation, uncoordinated gestures, unusual behavior and changes in perception. This stage can last from 1-2 minutes.

And finally comes the “desired” stage. A 2 minute round of feeling “high” when you lose all sense of reality and become part of your surroundings. Often time, people film this period and post on YouTube.

People have trouble speaking or forming words. They twitch and topple over and often lose control over their mental state. This period lasts for 2 minutes usually.

This is the phase where the salvia experience can take a bad turn. Some people feel agitated because they have no control over their bizarre experience which can trigger a panic attack or paranoia.

After this stage comes a stability period of 5-8 minutes in which the effects starts fading. And after 15-30 minute, the aftermaths of salvia completely wear down.

Depending on a person’s height, weight, dosage and method of ingestion, the duration and intensity of the salvia effects can vary.

Unlike other addictive drugs, you won’t feel hangover or dizziness which is why most people use salvia as a “fun drug” and consider it harmless.

Just because the drug is legal doesn’t make it justifiable to use casually. You need to remember that although Salvia isn’t like your typical addictive drugs i.e. cocaine or LSD, it is still a mind-altering hallucinogen.

We need to keep in mind that any psychedelic drug can cause harmful and unwanted psychological side effects.

Although, there are some misconceptions about salvia side effects that have no solid ground. I hope after reading this detailed article, you are now crystal clear about Salvia’s possible side effects.

If you are taking any medications or suffering from a serious ailment, it is always better to take your doctor in confidence before using Salvia or any other kind of recreational drug.

Top Kratom Botanicals in The US

Where To Shop CBD Oil In New York As A Tourist?