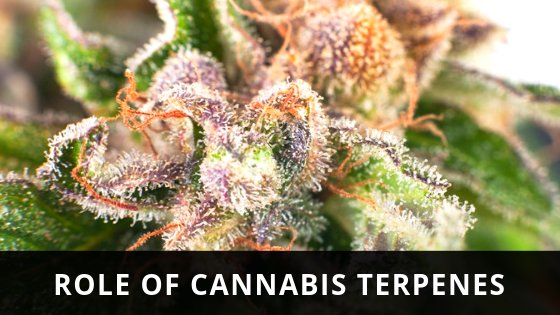 Our nose is capable of deciphering between 1 trillion odors of varying types, quickly. Among all five, this sense can remain accurate, irrespective of time and occasions. It also links many emotional distresses and satisfaction with our tendency to bond with various odors.

The statistics behind this particular sense have paved their way to cannabis empire too. Researchers have modified cannabis in a manner to gain prominence and utmost attention. This job has been given to a compound known as ‘Terpene’.

The distinct aroma in all the types of cannabis is because of these terpenes. Many have linked it solely with identification of different cannabis types with the help of their odor. However, terpenes have proved out to play a role n health and psychoactive properties of cannabis.

The word Terpene was coined from the reference of the term ‘Turpentine’, formally spelled as ‘Terpentine’. They are a biosynthetic derivative of isopentyl pyrophosphate. These organic compounds are primarily used in the modern medicine and cosmetic world due to their firm and distinctive odors.

Terpenes are extracted from the cannabis plant often. The Cannabis plant has resin glands that hold up the most raw and organic form of Cannabis Terpene. It comes out as an oily substance that is rich with aroma. It shouldn’t be confused with the term Terpenoid. Terpenoids, on the other hands, are the type of terpenes that have been denatured during curing via oxidation.

There are other sources of extraction of Terpenes too. They work to help differentiate between two cannabis types on the basis of smell and effects. The purpose of their development doesn’t only cover this aspect. In the maintenance of health, terpenes have been under usage solely as well as recently, combined with CBDs.

They work marvelously in speeding the process of pollination. These compounds are an excellent repel for predators. Every Terpene production is under varying circumstances like age, weather, maturation, fertilizers, soil, and time of the day. Other than the characteristic smells and favors, they can continue synergistic interaction between different cannabinoid compounds easily.

The specific part of terpenes in cannabinoids is unknown as it is a Schedule I drug. Based on current and pre-existing evidence, it is safe to say that terpenes are somehow related to psychoactive modulations in the body.

As previously mentioned, terpenes tend to work synergistically with other compounds in a cannabis type; the entourage effect. It merely portrays that in particular cases, not only the terpenes but the whole plant, along with its other compounds, is necessary to reach the desired effect.

Terpenes are now believed to interact with specific receptors inside the body, hence causing effects in those particular regions and the proximities. They mainly link with immune, nervous, and gastrointestinal systems. Some, for example, myrcene is capable of crossing the blood-brain barrier, hence, causing a decrement in its resistance.

Myrcene is related to mangoes, lemongrass, thyme, and hops. It is as well, the most abundant and easily-retrievable terpenes amongst all. Myrcene is commonly found in a total of two strains; Sativa and Indica. A total of 0.5% of myrcene in any plant simultaneously produce effects like Indica.

Science Direct presents that the Myrcene content in some Cannabis plants can be high, relative to a range of 60 to 65%. The percentage of myrcene determines if a particular strain of cannabis is a Sativa or Indica. It comes with a known impact related to anti-mutagenic, analgesic, and antibiotic effects as well.

It is the Terpene responsible for the floral and light smell. Lavender is the characteristic of this Terpene; it is also the reason for its high acceptance among people. The primary reason for its extensive consumption is its amazing stress-relieving properties. The prime features of this Terpene also add up its potency in providing stress-diminishing and anti-depressive effects.

There is a considerable debate going on to determine its efficacy in seizure and psychosis. There is not much evidence about the exact results in this regard.

Many people are habitual of consuming cannabis in a lemon scent. The origination of this scent is in the court of Limonene. Oranges, limes, lemons, and other citrus fruits are the parent sources from which Limonene is extracted.

The intense fruity smell of Limonene is as well, found in many cleaners and cosmetic items found in every house. The critical property of Limonene is the anti-fungal (toenail infections) and antibacterial coverage. Limonene administration is via the inhalation route.

This particular Terpene works to enhance the absorption of other terpenes in the body (GUT and mucosa). The prime reasons for the consumption of Limonene are its stress-relieving effects; however, it is a genuine mood-enhancer as well.

Pinene; originated from pine, is among the most amazing and effective Terpenes. There are two forms of Pinene. The alpha form is the commonest of all the types and smells mostly like Pine needles. The beta form has odors of dill, parsley, and basil. It is not much common.

It is a crucial terpene used when they reach requires bronchodilation. Its potency in this aspect makes it very helpful in the improvement of airflow to lungs; hence, in asthmatics. For thousands of years, Pinene has been under use for its anti-septic potential as well as its anti-inflammatory coverage.

It is one of the terpenes that cross BBB (Blood Brain Barrier). It has been used for the enhancement of memory for a long time now. This terpene is also remarkable in its effects regarding alertness and vigilance. Researches are going on to prove its benefit in counteracting memory loss.

Caryophyllene is known for its woody, spicy, peppery fragrance. Therefore its origination is closely linked with cinnamon and black pepper too. Many studies have shown, this Terpene is being used to rule out aggravation.

It is likewise, used for mood-enhancing and anti-anxiety effects. The strains with Caryophyllene vary largely. Some are well-known, e.g. Rockstar.

This Terpene is the marker of ensuring a good increase in appetite. Humulene guarantees you in the quick suppression of nauseous effects. There are conditions that accompany a suppression in one’s desire of having food, ultimately causing weight loss. Humulene proves out to be of excellent help. The main sources to extract Humulene from are basils, hops and cloves follow.

Difference between Cannabis and Non-Cannabis Terpenes

Terpenes are now mostly isolated on a daily basis. Due to this powerful approach, many of them come from a non-cannabis origin and many originating from cannabis. Researches identify various terpenes, separate them, and later decide the type that is fine to consume based on the effects of therapeutic fulfillments.

These are the terpenes that are extracted directly from different cannabis plants. These provide better synergism and entourage effects as the non-cannabis type. It can be explained by their similarity with the comparable strains of CBD and related compounds.

Some claims say that these terpenes are as fresh as the smell of a parent plant. However, some downsides come along with this type. These terpenes are harder to extract, in the same way, the process is lengthy. The process, in fact, yields a small amount of product of the kind of effort put in.

The laborious process of extraction simultaneously adds to their costs. Moreover, the chance of inconsistencies are high, in sampling. Taste and smell might differ the very next time you buy it. The raw form also brings the threats of harsh side effects from this type.

Non-Cannabis terpenes are further divided into natural (from plants or fruit rinds) and synthetic (created in labs) forms. There are no known harsh psychoactive effects from this type, hence which makes them largely accepted.

There is a vast reach of their sources and extraction in bulk, therefore these terpenes are inexpensive as well. Due to their low-cost and processing benefits, samples can b put through research extensively again and again to find improvements in their effects.

They are the new talk of the town due to their provision of precisely the same features and benefits as the cannabis-derived terpenes. According to the studies, they bind to various receptors in the body as well. The steam-distillation of this type is done to maintain consistency in the samples over time.

However, few people are fond of the smell of cannabis; this type doesn’t provide it. Similarly, if you are allergic to certain aromas or are not a fan of strong odors, you might not like them too.

Terpenes vary according to their boiling points due to the difference in their structural composition. Similarly, if you will consume it under a vaporization method, it is required for you to know the ideal temperature to reach the desired effects.

Many vaporizers on the market come with fine adjustments of temperatures either within or can be controlled via applications. You can consume your Terpene with access to all the beneficial effects, with correct adjustment in temperature.

They exert milder effects on the body and ensure a consistent release of a specific amount of cannabinoid and terpenes. As many people are aware of the harmful effects of smoking and the by-products, they are easier to convince in the utilization of vaporizers.

The Legality of Terpenes

Are terpenes legal? Terpenes derived from Cannabis sources still come under the heading of marijuana. This makes then illegal under the Federal approach. Some states that approve of medicinal marijuana, have terpenes legal and affirmed for consumption. However, non-cannabis derived terpenes are legal and safe to consume in a large number of states.

There are a lot of researches under-process to prove the improvements in terpenes already existing. Investigations are carried out to discover newer and better types. Carbonization is known to destroy terpenes on wrong temperature alterations. Therefore the temperatures ideal for their consumption are being found day by day. Companies legally selling terpenes are to make sure they are educating each customer profoundly on this sensitive topic of consumption and awareness of terpenes and CBDs. They are the marker of a very important difference that is now in the field of cannabis and its compounds.

What is CBD Pain Freeze? Is that Scientifically Researched & Approved?