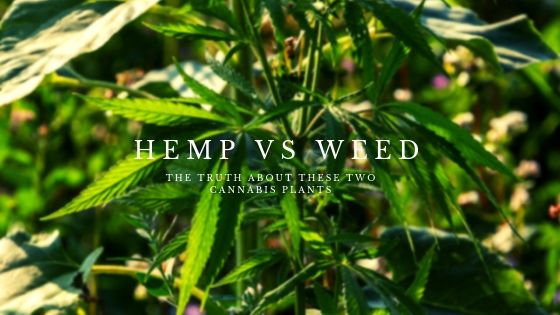 Hemp vs weed is a discussion that is rarely held but needs to be thought upon and understood. Many people are not aware of the fact that there is a vast difference between hemp and weed. Sharing similar appearances and belonging to the same genus (Cannabis), it is hard to tell them apart.

Both are distinct varieties and belong to the genus of Cannabis Sativa.

However, in truth, both hemp and weed should not be considered parts or products of Cannabis.

More shockingly, these two are not plants at all. They have been regarded as related to Cannabis to allow for easy classification.

Hemp and weed are both for vastly different uses and purposes.

Weed is known for its popular uses in medicine and recreational directives.

Hemp, in a distinct dissimilarity boasts more than 25,000 possible applications. It is already in use mainly for nutritional supplements, skin products, plastic products and even fabric and clothing. Although not as popular in these industries — hemp is also good for automobiles and construction.

Functionality is not where their differences end

Other than having different uses, both of them are disparate in their chemical makeup. Hemp has a lower percentage of Tetrahydrocannabinol (THC).

The legal definition states that if the THC content is 0.3% or less – it is hemp and more than 0.3% is weed or marijuana.

The difference also lies in the amount of CBD (Cannabidiol). Hemp has higher concentrations of CBD while weed does not. Weed is also cultivated differently from hemp.

That was just a sneak peek at the many vast differences between hemp and weed.

Despite hemp being unalike its more famous counterpart, both have their similarities too. One could be said to have derived from the other.

So, what exactly makes them so alike and what draws them apart?

In the end, can one of them render the other obsolete?

These are some of the recent questions that have risen in people’s minds and I will answer all shortly.

Their origin, the Cannabis family

The Cannabaceae family of flowering plants has Cannabis as a separate genus. It is then further divided into three: Cannabis Sativa, Cannabis Indica and Cannabis Ruderalis.

Neither hemp nor weed are thought of like plants and are wrongly associated as ‘strains’ or ‘species’ of Cannabis and are just classified in terms of Cannabis. It has more to do with culture than science.

They look and feel the same. But, the difference is the amount of THC. It makes sure that while one may get high on weed, there is no way the same can occur on hemp.

If we look at the chemical makeup of both ‘hemp’ and ‘weed,’ we realize that they are just further varieties of Cannabis. One has less than 0.3% THC (hemp), and others have more than 0.3% THC (weed).

Hemp and weed are similar: why?

As explained above, hemp and weed are more similar than we could have thought. The recent 2018 Agriculture Act , provokes a question. Why while cultivation of Hemp has been allowed, was Weed left behind?

The simple answer lies in the percentage of THC and the substance’s ability to be psychoactive.

Simply put, weed gives you a high while hemp does not. Put this way, its cultivation being banned is not surprising.

Due to the similar appearance, short of conducting a chemical test and finding out the THC percentage, both the varieties of Cannabis would be indistinguishable.

Both have a similar appearance. Both varieties of Cannabis are indistinguishable except for the THC percentage. Only a chemical test will easily distinguish them.

The similarities between the two are confusing even for the law enforcement agencies. Recently, many arrests have occurred on accusation of carrying and transporting illegal weed and not legal hemp. The police department has now put in a request to private companies for instruments that can differentiate hemp vs weed.

How are they different?

To shelve hemp and weed under Cannabis is a disservice and also misleads from understanding the true diversity of both. Relegating hemp and weed to the same genus is another wrong way of looking at them. Now that we have evaluated all the ways both weed and hemp are similar let us delve into how they are both different.

Hemp and Weed may both come from the Cannabis Sativa too, but their appearance would be the one factor that sets them apart here.

Weed is cultivated from the female plant. The leaves are also broader while the leaves of Hemp are leaner and tend to be shinier than those of Weed. Other than these few sharp differences, both plants look the same.

Hemp does not affect a person’s psychology and requires minimal care when grown. It flourishes in moist climates and has great adaptability. Weed has to grow in monitored environments with certain specific conditions. Hemp can withstand much variety in climate and is considered very durable. They have fibrous stalks and affinity with neighboring plants.

For weed, at least six feet of space between plants and warmer climates are a necessity.

Chemical makeup is where the major distinction between the two lies. It is specifically in Tetrahydrocannabinol. THC is the chemical responsible for the differing psychological effects of weed and hemp.

While they can produce almost the same levels of CBD , the production of THC varies a lot.

The amount of THC in hemp is usually maintained at 0.3% in developing countries while weed can contain up to 30%.

The 0.3% maintenance of THC in hemp is the one specific reason why it causes no psychological effects. Hemp’s CBD threshold is also higher than weed’s, and since CBD is counteractive to THC, the effect is further reduced.

Hemp is grown outside in large plots and proximity. The plant takes 108-120 days to mature and can cope with varied weather conditions. Weed grows in very varied conditions and needs a strictly controlled environment.

Interestingly though, if a hemp plant grows too close to weed or if the pollens are somehow transmitted from the hemp field, it has an adverse effect on the weed. It can decrease its psycho-activity, destroying the crop and the quality.

Ever since the Marijuana Act of 1937, all strains of Cannabis were all but prohibited. Due to burdening of taxes and the unreal export laws that the Government levied on it.

There was no distinguishing between hemp and the other families of Cannabis leading to it being prohibited. It became known as a disallowed commodity under the Controlled Substance Act of 1970.

The Agricultural Improvement Act of 2018 has made Hemp, and any of its products that encompass less than 0.3% THC legal. Weed, though is still controlled and is also considered illegal to carry or transport.

Hemp and weed have their distinct uses due to their differing chemical composition. The euphoric effects of THC are attributed to their property to bind to certain receptors in the brain, causing the ‘high’ feeling.

This feeling is why weed is known for its calming effects as well as a wide variety of recreational uses.

Hemp, on the other hand, is multi-functional with industrial, culinary and medicinal uses.

The differences between hemp and weed, especially since the new developments, is not easy for the layman. But, with this text, we hope to have made it better. Education is essential in the grassroots before both hemp and weed, may be correctly differentiated.

The wrong use of both the terms, hemp and weed, has become a part of our principles and civilization. A lot of re-education and awareness is required before we could hope to change the attitude towards both.

It is essential that we understand how they differ in appearance, uses, and composition.

Learning about hemp vs weed will enhance the fundamental understanding of Cannabis. But, it is also vital to help understand one’s rights and be able to avoid any legal complications. A clear discourse and discussion about weed and hemp is the right way forward.

We aspire to prevent any further misunderstandings and another decade of misinformation.

Five Facts You Need To Know About Delta 8 THC Shatter

Positive Effects of Cannabis on Your Body

Your Guide To CBD Lube For Sex: Top Lubes And How...

What Is The True Kratom Color?