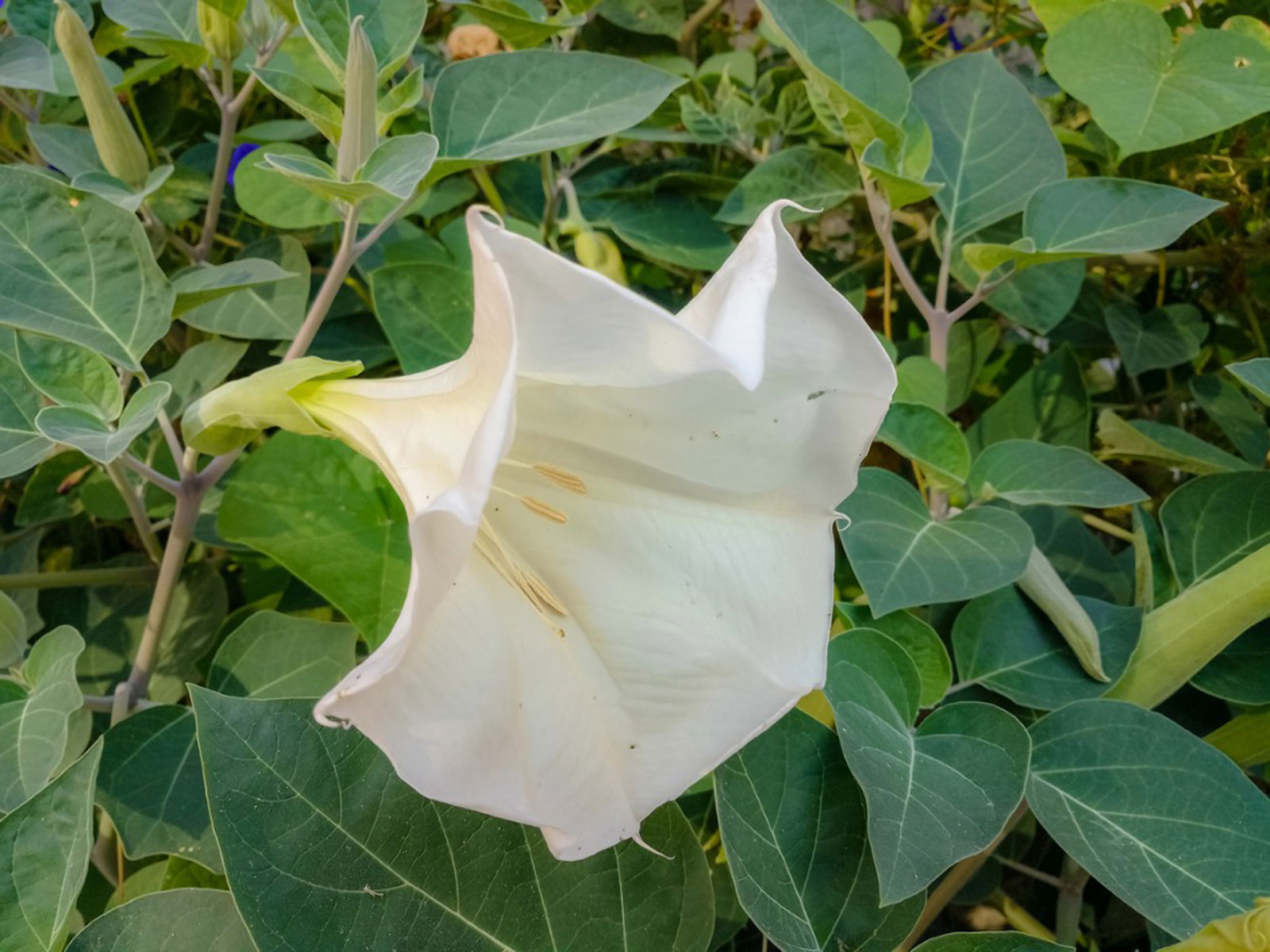 People are always looking for new substances to enhance their recreational experiences, and Datura is all the rage nowadays. What apparently looks like nothing more than an ornamental flower is packed with loads of medicinal yet toxic properties. But the main question is it possible to get high off of Datura?

Yes, Datura can indeed get you high. The roots, seeds, or the entire plant are often consumed to enjoy its hallucinogenic and euphoric properties. Datura’s effects can last up to two days, and the trip can be intense and overwhelming. After experiencing a full-blown Datura trip, most people see the experience as positive, no matter how uncomfortable or frightening it was. For other people, the experience was so transformative that they referred to it as a “turning point” in their lives. A Datura high has its ups and downs, but here are some things to keep in mind before you decide to give it a try.

Datura, commonly known as (Jimson Weed, Moonflower, Hells Bells, Devil’s Weed and many others) is the scientific name for a genus of flowering plants belonging to the nightshade family that have been utilised in magic, religious rituals and poisons for centuries in various parts of the world. The exquisite pastel-coloured and trumpet-shaped flowers of the Datura make it a popular flowering plant in decorative gardens.

Often misconstrued for Brugmansia plants, also known as angel’s trumpets. Many Datura species have trumpet-shaped flowers, which can be pink, white, yellow, or purple and can be found in various colours. Two of the most widely-known species of Datura include  Datura Inoxia and Datura stramonium.

Spiny capsules enclose Datura seeds, which open and fall to the ground when ripened. Usually grown in tropical and warm conditions, the plants can reach around three feet. All of the subtropical regions of North America, with Mexico as their centre of origin, are home to this genus. For centuries, D. ferox and D. metel were native to China, India, and Southeast Asia.

Datura’s intoxicating and therapeutic characteristics are due to the presence of three chemicals Hyoscyamine, Atropine, and Scopolamine. These chemicals disrupt acetylcholine, a chemical messenger found in the brain and nerves. The manner in which species are grown and stored, its alkaloids’ concentrations vary due to various factors such as temperature, humidity, and other environmental factors. Atropine levels are highest in seeds, which contain about 0.1 mg of the drug per seed.

It treats various stomach disorders, including ulcers, IBS, and pancreatitis. It can produce sleepiness, headaches, blurred vision, and drowsiness, to name just a few of its effects.

Motion sickness can be alleviated using a prescription patch containing scopolamine. Scopolamine has the same side effects as atropine and hyoscyamine. Drowsiness, blurred vision, and dizziness are just a few of the side effects.

With proper medical care, the negative effects of these three substances can be avoided, and the medications are generally safe when used under supervision. However, when combined, like in Daturas, they can be extremely toxic and simple to overdose on.

Can Datura Get You High?

Although it can take up to four hours for the full benefits of Datura, most people report feeling the effects between 30 to 60 minutes after ingesting it. While the peak effects of this flower might linger for days, it is more normal for them to last 12-24 hours. There may be lingering effects of incoordination, vision, and speech for up to a week following.

There’s also a growing detachment from what’s commonly accepted as reality, which is either unnerving or not. Strangely enough, you might think nothing of it.

Datura-induced hallucinations, in particular, can appear entirely normal even when taken out of context. Inanimate objects have been known to start talking, and absent friends and family have been known to show up out of nowhere. There are various ways these beings can interact with you, from simply staring at you and not saying anything to starting a full-fledged conversation with you.

The datura experience is described as a “waking dream” and the only psychedelic trip that is truly hallucinogenic.

Datura plants, especially Datura Stramonium, can be consumed in various ways. It is possible to smoke, boil a tea, or make an ointment from the plants. It’s not uncommon for people to eat the plant’s seeds since they contain varying levels of psychoactive chemicals. To guarantee an even distribution of the alkaloids, the dried plant material must be finely powdered before use, no matter how you want to consume it.

The legality of Datura in the US

Datura is not federally scheduled in the United States, although it is regulated in most states, including Connecticut, Nevada, Louisiana, Kansas, New Jersey, and Oklahoma. Datura that is intended for human consumption is frequently targeted by these prohibitions. On the other hand, Datura stramonium is unlawful in the state of Kansas for any purpose. Similarly, authorities in New Jersey routinely kill natural populations of the plant.

Anyone contemplating the use of Datura stramonium should first get advice from a qualified medical expert. They should be aware of the potential risks and dangers, including bad reactions and take care to limit the possibility of having major consequences from taking the substance. Recreational drug use is risky if not done correctly. Because Datura isn’t controlled, you’ll never know exactly what you’re getting when you use it, so it’s best to do your research.

CBD Oil: An Emerging Trend in Canada And Legal Aspects