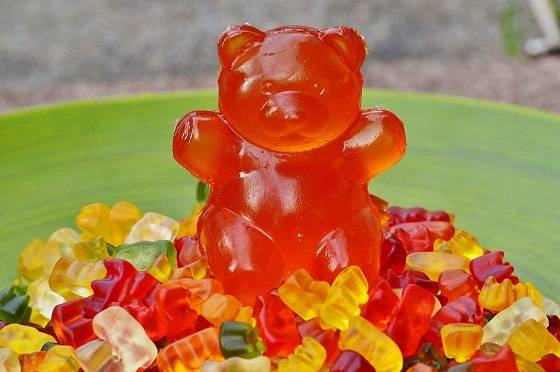 Gummy bears are everyone’s childhood favorite. Children all around the world enjoy eating gummy bears because they are sweet, chewy, and yummy. Precisely what kids like anything to be!

They are so addictive that not just kids, adults love eating them so blame it on the flavorsome candies. It’s said that if all the gummy bears that are produced in a year are lined up, they will circle the planet earth four times. This is amazing, right!

So let’s dig a little more in the history of these world’s famous Gummy bears here:

These sweet and chewy small candies have quite an exciting history.

The person behind this greatest invention is named to be Hans Riegel. He used to live in Bonn, Germany. So according to the available facts, in the 1920s, Riegel and his wife were candy sellers in Germany streets.

He started his own hard candies company by the name Haribo after combining his name letters and his city letters.

After selling candies for years, Riegel and his wife created their fruit-flavored gummy candies like the dancing bears in German festivals.

This was during the year 1922 when dancing bears were popular in festivals. Inspired by the idea, Riegal introduced the gummies, and they were an instant hit!

Everyone loved them, and within no time, these gummy bears were popular. After working hard for a few years, in the year 1930, the Haribo had 160 employees and a sales organization that supplied Gummy bears all over Germany.

During these years, gelatin gummies were already famous, and people loved them, but the idea was old and too familiar. The reason why these gummies became instantly popular, because of their bear shape and fruity flavor.

Even nowadays, Japanese rice candies and Turkish delight that is one of the most famous desserts of Turkey come under the same food category with a slight difference.

After the big hit of gummy bears, the demand of these candies increased all around the US.

More flavors started to pop up, and right now, there are so many types of gummy bears available in the market. Every store, every market, and every shop sells gummy bears of different types.

Do you know that Haribo Gummy bears are actually called Harribo Gold bears? Check out these five existing colors and flavors of gummy gold bears;

How Gummy Bears Are Made?

You would be surprised to know that gummy bears are made in a special machine that is called Starch Mogul. Usually, the process takes overnight. The powdered starch is filled in a large tray and the gummy bear moulds are filled with that hot mixture. Then it is left overnight so that the starch is set and gummy bear shape is formed.

After leaving the moulds overnight, the gummy bears are cooled down and then they are removed and cut from the moulds. Then they are packaged and sent to the suppliers.

Are Gummy Bears Good For Health?

Millions of gummy bears are sold annually, and everyone eats them, but that doesn’t mean they are suitable for your health.

Despite having protein, these gummies are full of sugar and empty calories. Although there are sugar-free gummy bears in the market, but they come with side effects too.

Check out the composition of a gummy bear:

All this is sugar and every serving of a gummy bear that means 13 Haribo bears, has around a hundred calories. The ratio of protein is around two grams and there are twenty-three grams carbohydrates.

Apart from that, there are 14 grams of sugar in each serving. This makes them a sugar high food. Not that healthy, right! The discussion of halal or kosher gummy bears is always confusing.

But Haribo sells halal gummy bears too in countries where people don’t eat pork gelatin. Although all the gummy bears’ types are not suitable for people, who are vegan because they have beeswax.

Side Effects Of Eating Gummy Bears

Although gummy bears have protein, they are still not very healthy to eat. There are some side effects related to eating too many gummy bears regularly. First one is the presence of sugar. The highly refined sugar, dextrose, and high fructose corn syrup is the main ingredient of gummy bears. That makes too much sugar and it is not suitable for your insulin levels. Too much sugar intake also affects your growth hormones.

That is the reason doctors don’t allow kids to eat sugar-based products.

Another side effect of gummy bears is tooth damage. We all know sugar damages teeth so gummy bears, that are full of sugar damage teeth too. Apart from that, the gummy bears are associated with weight gain because of high calories. According to The American Academy of Pediatrics, gummy bears are a reason behind potential choking in kids too.

Amazing Facts About Gummy Bears You Should Know

If you are a gummy bear fan, you will love these fun facts about your favorite candies.

1) They Are Not Originally Called Gummy Bears

You would be surprised to know that actually these gummies are called gold bears, but they are not made of gold. They exist in five different flavors and colors.

Gummy bears inspired the Disney pictures so much that they started a television series based on gummy bears. This series had 47 episodes, and it ran from 1985 to 1988. The series is all about six gummy bears who had magical powers. Kids love the series even now.

3) Gummy Bears Have A Different Taste In The USA

In the USA, they don’t have the apple flavor, and their recipe is also different from the rest of the world.

That is why gummy bears taste slightly different if you get them from the USA compared to other parts of the world.

This is so awesome, isn’t it! The gummy bear song that we all love has more than 45 million views on YouTube. One of the most-watched videos on the internet ever.

5) All Gummy Bear Slogans Are Written By Riegel

Riegel, the founder of gummy bears, has written all the commercials and slogans of Haribo. He didn’t trust any ad agency, so he created all the slogans himself. That was his level of dedication for the gummy bears.

In the year 2014, Elisabeth Windisch created the world’s largest and heaviest Gummy bear in Germany. It took around six days in total to set this gummy bear up, and it was kept in cold storage to avoid any damages. It is one of the biggest gummy bear ever!

7) Vegetarians Can Eat Gummy Bears Too

Because of the presence of pork gelatin, vegetarians didn’t eat Gummy bears, but now they have a gelatin-free recipe for making vegetarian gummy bears. This is for all those people who are Muslim and vegetarians so that they can enjoy eating gummy bears too.

8) Gummy Bears Are A Good Option For Eating Post-Workout

According to the research done by the Journal of the International Society of Sports Nutrition, a pack of gummy bears is right for your post-workout. The reason is that they help in digesting carbs and recovering the glycogen you used while working out. So if you love gummy bears, you can eat a pack after your exercise session.

9) There Is An Extraordinary Story Behind The Name Haribo

Riegel named his company Haribo after mixing up the letters of his family name and his city name, and he finally picked the name for his candy business.

It’s said that more than a hundred million candies are produced each day and if they make a head to toe chain, they can cover the planet four times.

11) There Was A Designer Dress Made Out Of Gummy Bears

12) Gummy Bears Are Good For Your Hair and Nails

Sadly on October 15th, 2013, Hans Riegel passed away. He was 90 years old at that time, but he left a legacy behind. What started in a small setup in the city of Germany with few supplies is now one of the world’s leading global brands. Haribo is the number best-selling Gummy bear company in the United States now.