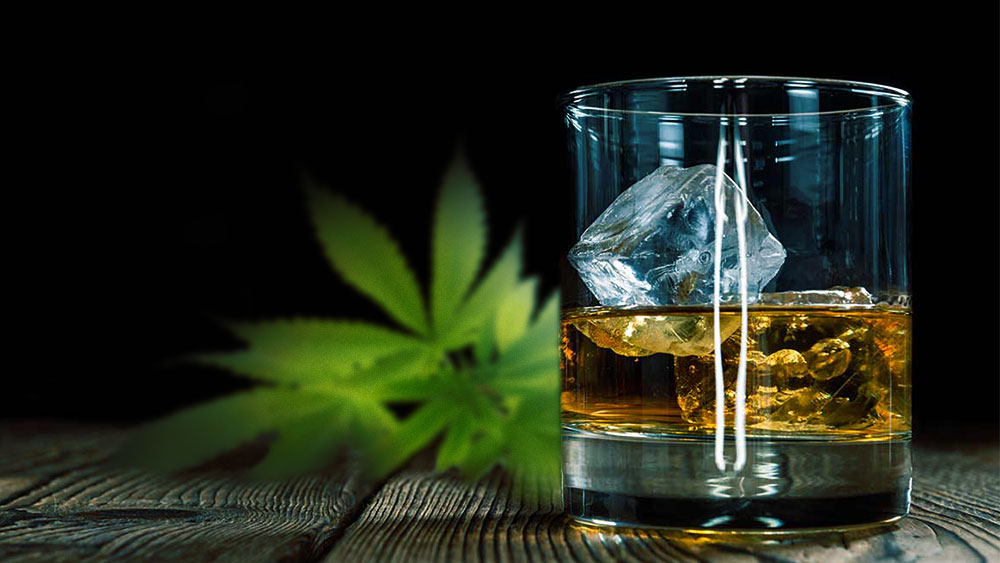 Alcohol has been the center of attention for years while writing a prescription. It has known to alter the metabolism of various compounds and drugs if consumed simultaneously with them. Similarly, in the case of marijuana, CBD, and alcohol, the story is no different.

Marijuana and alcohol, both are known for their psychoactive effects in the body. Henceforth, consuming them together can cause synergistic and undesired effects. The new topic of discussion is the less-psychoactive compound CBD. Is it safe to consume CBD and alcohol together?

There have been tons of researches done to figure out the potential side effects of consuming these two together. However, the results seemed to show something different. Although, CBD can show various positive effects if administered with Alcohol; however, it cannot lessen the effect alcohol has on a person’s consciousness.

CBD can decrease the alcohol content in the body and at the same time, lowering the tendency for alcoholic poisoning. Similarly, CBD can promote cell growth and decrease their lysis. All the details are described below:

CBD in Beer & Cocktails — The New Trend Introduced in Market

It is not long ago when studies started to prove the medicinal and health benefits of CBD in our daily lives. Since then, CBD has been effectively mixed with various formulas to generate better and sufficient products.

Similarly, CBD is now found in various topicals, skin and hair care, dietary supplements as well as pet products. Now with the advancement of technique, trials were done to find its efficacy when consumed with alcohol. Here’s how the trend followed:

Beer is now being introduced in the market with the combination of hemp and hops. Not only are these compounds providing an optimal natural bitterness to the drink, but they’re providing potent aromas as well.

At the same time, the terpenes in these mixtures provide the best citrus taste to enhance the refreshment they offer.

It is one life-changing approach that bartenders are desperately waiting for to legalize. CBD cocktails can be the best thing that is sold as they come with the guarantee of no hangover and with the health benefits of CBD.

There can be a huge variety in taste and aroma when CBD will combine with cocktails, which will eventually increase the sales to an extreme level. Many people head to the bars in depression, stress, or anxiety. This powerful combination can be the solution to all these problems and in turn, a source of great money to the bartenders.

Few Facts You Need To Know About CBD and Alcohol

Researches show that CBD can alter a lot of harmful effects that can be caused by the usage of alcohol. However, when it comes to the minimization of alcohol intoxication, it seems to be less effective.

As mentioned before, CBD can’t stop alcohol from affecting your consciousness. That way, it is safe to say that although CBD itself doesn’t possess psychoactive effects, it can’t work to reduce the psychoactive effects alcohol will have in your body.  In short, it doesn’t make anyone less drunk.

CBD can limit the degeneration of neurons

CBD has shown to be effective in limiting neurodegeneration. Similarly, it limits the death of brain cells and in turn, power the cognition and psychoactive control of a person on the body. Alcohol, on the other hand, has been the cause of brain degeneration in alcoholics.

Here is the difference; CBD can limit the neurodegeneration caused by alcohol, but it might not play a positive role in the modulation of neurogenesis.

However, this proved out to be a great discovery that showed the benefits of using CBD simultaneously with alcohol, to limit the degeneration of neurons.

Our body is capable of producing its free radicals that can cause toxic reactions if left for long periods. There are various mechanisms in the body to fight these and some potent antioxidants that are either metabolized or extracted from the diet, work to limit these radicals.

In the same way, CBD is a potent antioxidant. This property ensures the clearance of free radicals from the body in a faster pace. Lipid peroxidation is one of the processes of generation of free radicals, and alcohol seems to boost it up.

CBD is known to reverse this increase profoundly. It makes it a very sensible decision to combine alcohol with CBD so that the intoxication-related to free radicals can be minimized to some extent.

CBD is useful for liver

Fatty liver or hepatosteatosis is the disease that normally results from alcohol consumption or obesity. This disease can increase the susceptibility of various dangerous liver diseases such as hepatitis.

If there are levels of CBD in the bloodstream at the time of alcohol consumption, they can work to limit the chances of development of fatty liver. CBD enhances the process of Autophagy (self-destruction of harmful body cells). It, in turn, reduces liver injuries and inflammation.

Now that we are well-aware of the fact that CBD doesn’t have any effects in decreasing the psychoactive effects of alcohol, it is easier to picture the basic functions. A study conducted to figure out the potential advantage of CBD proved that it could effectively lower the blood alcohol levels.

Similarly, CBD is conducting all its functions on a separate basis. If it continues to lower the concentration of alcohol in the blood, there are chances of fewer side effects.

CBD and alcohol are dangerous for driving

It is already a crime to drive in an impaired state of mind. However, you might not only be breaking the law but causing yourself a lot of trouble as well. You are not only risking your life but of the people in your surrounding as well.

It was well-stated before that CBD cannot alter the psychoactive effects of alcohol, thereby having CBD with alcohol while driving is dangerous. If you intend to have a drink simultaneously with CBD or separately, don’t drive – carpool with a friend or hire a cab.

Two types of CBD are safe to consume with alcohol

It is to be made sure of that CBD is not confused with any combination that contains more than 0.3% of THC. Any percentage higher than that can group that strain under the heading of marijuana.

Marijuana and alcohol cannot be consumed simultaneously, as both the compounds are capable of causing psychoactive effects. Although a study from McLean about the functioning of THC in adults, shares a different point of view, the visible effects portray a different story.

A combination of both the substances (THC and Alcohol), can lead to overdose. It might concurrently give rise to alcohol toxicity which, in, turn, can cause death.

CBD is now being used as an intervention to render the alcoholic addiction and the behaviors involving it. CBD has modulatory neuronal effects, so it shows better results with the patients that are currently facing withdrawal, relapse, and addictive behaviors.

Research by Scripps Research Institute showed less addiction for alcohol after consumption of CBD, in rats. It can powerfully pave the way for the betterment of patients currently in rehab or struggling with addiction. It also showed fewer chances or relapses in the route to treatment therapy.

The question of taking CBD simultaneously during drinking was answered above in a brief context. The effects of CBD on the body can be beneficial if it is consumed with alcohol. CBD has a beneficial impact on liver function as well. It states that CBD if consumed during or in combination with alcohol can be a very great help if it doesn’t contain THC levels more than 0.3%.

Yellow Bali Kratom – Everything You Need to Know About This...