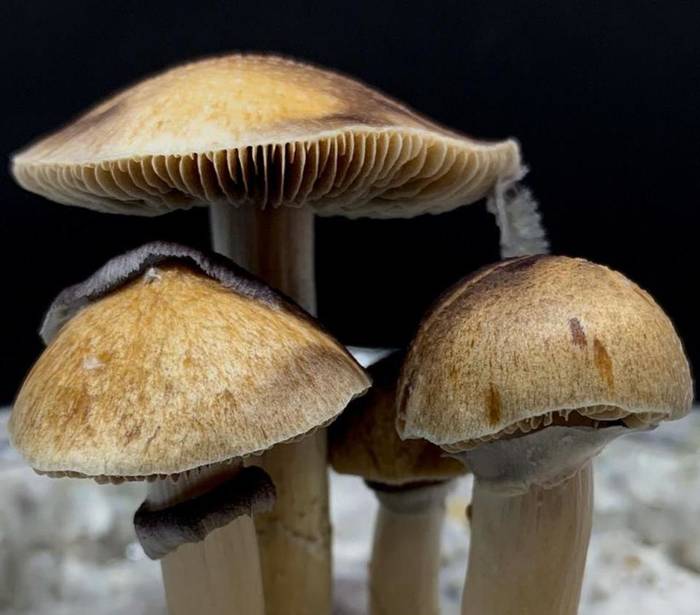 For most of us, the word ‘mushroom’ is limited to the edible forms of mushrooms that we add to our pizza, mushroom soups, and sauces. That is not the only specie and type of mushroom in the world.

Mushrooms have over 10,000 types, out of which over 180 are known to be psychedelic, also called Psilocybin Mushrooms or Shrooms or Magic mushrooms because they have a unique power of affecting the brain.

Due to their psychoactive properties, they are known as the psychedelic or hallucinogenic species of mushroom. By the end of this brief read, you will be well acquainted with the different types of psychedelic mushrooms and their effects.

Before knowing the types, one should have a fair idea of what makes these mushrooms the magic mushrooms.

Psilocybin mushrooms, as the name suggests, contain psilocybin or its derivative psilocin, which are well-known naturally occurring hallucinogenic and psychedelic agents. These are not new types of mushrooms; these shrooms have a long history of enjoying a unique position in ancient religious ceremonies.

Psychedelic mushrooms were not only ornaments of ancient history, but even today, their main constituent, psilocybin, has been shown to have an essential role in treating many psychiatric and behavioral conditions.

There are over 180 types of psilocybin mushrooms, out of which we have penned down a few here with their effects. The amount and derivative of psilocybin present in each type of magic mushrooms differentiates these from each other and determines the potency and strength of each shroom.

Psilocybe semilanceata, also known as liberty cap, is one of the most potent and most widely spread fungi. These yellowish-brown mushrooms with a conical or bell-shaped cap are found predominantly in the temperate regions of Europe.

Don’t be misguided by its size!

Although apparently, it has a smaller size, it is considered to be one of the strongest shrooms with stronger and robust psychoactive properties. With around 1% psilocybin, it can induce euphoria and visual hallucinations in around 30 minutes. The effects may last up to 9 hours.

Many users have reported feeling mild LSD-type effects with a liberty cap. They felt happy with boosted confidence. However, with its strong hallucinogenic, it may not be suitable for beginners. It may cause anxiety and stomach aches.

Pro-tip: Don’t pick these in the wild yourselves as P.semilanceata resembles poisonous mushrooms!

P.cubensis or Mexican mushroom has a characteristic umbrella or cap, which is why it is also called Golden cap mushroom. It contains 0.63% of psilocybin, 0.60% of psilocin, and 0.25% of baeocystin, therefore more potent. The younger the mushroom is, the stronger its effects are.

Its effects are experienced around an hour after ingestion. Visual hallucination and elated mood are common effects. Users have reported seeing distorted, colorful objects, and it appears as if the objects are moving. P.cubensis can make you feel trippy and giggly.

Depending upon the consumed type and the ingested dose, the effects may vary from mild to severe. Anything above 3.5 grams of dried Mexican mushroom is not recommended. For beginners, this value is even lower, no more than 1.5 grams is suitable for those who have just started their shroom journey.

Psilocybe baeocystis, also known as a bottlecap or bluebell, is found growing near the coastline. It contains 0.85% of psilocybin, 0.59% of psilocin, and 0.10% of baeocystin along with other non-psilocybin alkaloids. All these constituents together make this one of the top few with the most robust effects.

Since this type of magic mushroom is one of the potent types, 1 gram of dried or 5 grams of bluebell mushroom is enough to induce hallucinations.  Bottlecap mushrooms are known for their variable effects on different people. The most commonly reported effects include vivid and strange colors, elated confidence, and a heightened sense of enjoyment.

P.cyanescens, also known as Copelandia cyanescens, blue meanies, or Hawaiian mushrooms, contain 0.48% of psilocin, 0.11% of psilocybin, and 0.02% of baeocystin. It is more potent than the liberty caps, with about 1 to 2 grams of dried form imparting robust effects.

It is considered to be one of the most potent magic mushrooms. It induces both visual and auditory hallucinations. Users have reported seeing bright colored objects. The effects may last up to 6 hours or may extend to 7 hours with higher doses.

It is best to avoid higher doses of blue meanies as there have been reports of temporary muscular dysfunction with the ingestion of higher doses. Panaeolus Cyanescens has been a choice of those who want a temporary disconnection from the real world. It is also known to alleviate migraine and cluster headaches.

Psilocybe pelliculosa, growing in the United States and Canada, is known to resemble liberty caps both in appearance and effects; however, its effects are milder than the effects of liberty caps.

P.pedicullosa contains psilocybin, psilocin, and little amount of baeocystin. After 30-40 minutes of ingestion, it can boost up your mood, creativity, and productivity. Many users have reported feeling ‘more intelligent’ after ingesting pedicullosa.

Psilocybe tampanensis, also known as truffles or philosopher’s stone, appear as brownish shapeless mass or lump. When dried, the color changes to yellowish-grey with bluish hue at the edges.

This type of shroom is known to get bruised .i.e. turn purplish-blue when injured. Their texture is a little doughy, but it has an amazing nutty flavor. Some may be bothered by the bitter aftertaste this shroom has. Tampanensis contain 0.68% psilocybin and 0.32% of psilocin.

Approximately 3 to 6 grams of truffles are considered a strong dose. P.tampanensis gives an amazing euphoric feeling, with intense, vibrant colored visuals. Its particularly known for its euphoric effects and boosted creativity; otherwise, the effects are quite similar to liberty caps.

Although the shrooms have a potential of abuse and are not safe in high doses, researches have identified their potential role in treating some diseases and medical conditions.

The psilocybin mushrooms have been studied to evaluate the safety of the primary components of magic mushrooms. These have a profound psychological impact, thereby clouding the cognition and consciousness.

The effects on sensory levels, inducing visual and auditory hallucinations, cuts off the person, temporarily, form the real world, which may be a relief for the consumer, but prolonged derealisation can have harmful consequences.

There have been reports of disturbing experiences with shrooms. People claim to feel intense fear, anxiety, anger, and a feeling of death. Such experiences are considered ‘bad trip.’

All in all, the profound cognitive impact and adverse physical effects of psilocybin are a major safety concern for the FDA.

The psychedelic mushrooms are known to have no addiction potential or dependence. These magic mushrooms do not develop compulsive behaviors in the consumers; that is, you won’t have the cravings nor the drug-seeking potential. The withdrawal symptoms do not occur once you stop taking the shrooms. However, a few users have reported psychological effects upon discontinuation of the shrooms.

The major concern is that magic mushrooms develop tolerance quite quickly. This means that the same dose quickly loses its effects, and you have to take an increased dose to have the same desired effects.

The brain adapts to the psychedelic chemicals and downregulates their receptors. In other words, the metabolism of the drug increases, and the receptors decrease in number, forcing the person to consume a higher dose to reach similar effects.

If you wish to take a trip using any of these, be aware of the legal status in your country of residence and know the possible side effects if you overdo any of the shrooms.

For beginners, it’s best first to research the magic mushrooms, then if you wish to try shrooms, start with the lowest possible dose to see how your body reacts. Once well-acquainted, you can be your own boss!

How Delta 10 THC Is The Shield Against Mental Stress?