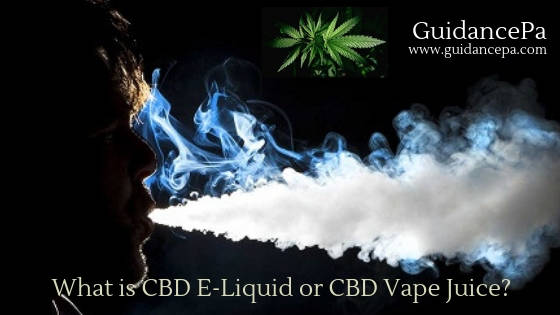 CBD vape juice and CBD e-liquids are the two terms often used interchangeably. The whole world debates over the definitions of both the terms, when infact both are pretty much the same. With the rise in e-cigarettes usage, CBD e-liquids also got fame and is now used commonly.

As we know that CBD isn’t psychoactive but is still used for recreational purposes — the entertainment world makes the most of it and has made a liquid for the use in e-cigarettes.

Don’t be surprised when I tell you that the drug industry is making some good bucks out of CBD. It is expected to bring $21.1 billion in revenue by the year 2020 by extracting CBD from the hemp plant. The boom in CBD usage is because of its oil.

It is used by dozens of industries for making different kinds of extracts, liquids, tinctures, oil, and some edible products. The process took the manufacturers a step ahead, and they introduced the world with CBD vape juices.

Before going into details, let me first clarify both terminologies. CBD, in its raw form, is powdery and looks like salt.

Therefore, it needs some carrier oil for consumption. Because different people use different ways of intake, the manufacturers used various techniques.

What is CBD E-Liquid?

CBD vape juice or e-juice is made up of carrier oil having less viscous properties. Well, the question is, how can oil be less vicious, right?

The manufacturers do some engineering here and apply a thinning agent to make it less concentrated. That makes it easy to inhale and allow you to enjoy vaping CBD.

Now, let’s go into the details of those thinning agents. There are two major compounds in CBD vape juices: PG and VG.

The manufacturers either use Propylene Glycol (PG) or Vegetal Glycerin (VG) as thinning agents. A small amount of flavoring and/or nicotine is added as an icing on the cake.

PG is free from both taste and smell and is completely non-toxic. It is due to the presence of PG that you enjoy a thrilling experience while vaping e-liquid as it gives a high throat hit.

However, there is a risk of allergy in it. Some people get rashes on the skin due to dryness and sore skin when they are reacted to it.

Since PG isn’t just used in drugs but in consumable items, too, the people who are already allergic are aware of their condition and treat it accordingly.

As I said it gives a sensational throat hit, but the cloud density isn’t very high, and so isn’t the sweetness.

VG is a natural compound derived from edible oil. Therefore, it’s sweeter than its counterpart. It has a heavy cloud density; therefore, it makes everything hazy in front of you.

As a result, you get a sensational feeling while vaping CBD liquid made up of VG.

However, it doesn’t give you as strong a throat hit as PG; thereby giving you a light feel. The allergy risk is minimal as a very few users reported any issues of reaction.

The last thing added in e-juices is a flavor to make you enjoy to your fullest. In CBD vape juices, terpenes serve the purpose of flavoring, aroma, and appealing coloring. The commonly used terpenes include limonene, Linalool, and a-pinene.

There are a lot more out there, too, and they work in a group to give an amazing flavor and a heavenly incense.

The amount of nicotine in e-liquid is varying, ranging from zero to 24mg. You get different varieties of nicotine, and the choice depends on your tolerance level. If you are a beginner and aren’t an addicted smoker, you should go for either a zero or low level of nicotine.

However, those who switch from heavy smoking to vaping, tend to vape CBD e-liquids with high nicotine. That covers both their smoking addiction and recreational craving.

When you try vaping for the first time, I advise you to start with a lower level and gradually increase if you want.

Some Characteristic Features of CBD E-liquid

CBD vape juice is thoroughly homogenous because the thinning agents make it easy for the raw CBD to get mixed properly. Unlike CBD oil in which, the food grade oil doesn’t allow thorough mixing, CBD vape juices make a very nice solution with everything adequately absorbed.

Despite the presence of oil in PG/VG, they have a superior dissolving capability. The VG dissolution time is more than that of PG, which means, VG is more dissolvable, and so it is more homogenous.

That depends on the making! However, a well-made one is crystal clear without any cloudy appearance. If there are variations in the making, then it gets a little murky.

So, whenever you vape CBD e-liquid, make sure it allows the light to pass through it to avoid any dirty ingestion.

They are legal throughout the United States. Its use is as legitimate as drinking a cold drink in public. The reason for this is it contains all natural ingredients and doesn’t put the life of a user or the people around him in danger.

Now, one thing that every user must know about is the safety; whether or not a drug he takes is safe for his health. Well, a person with common sense can answer this question, as drugs (of any kind) are dangerous for a human’s wellbeing.

However, I am glad to tell you that CBD e-liquid containing VG is safe because it is made up of natural compounds and help dilute CBD into a liquid.

But I warn you of vape juices containing PG! Avoid excessive use as it can lead to multiple health issues. It can cause severe allergies that can ultimately lead to kidney and lung disorders.

Do you confuse CBD oil with CBD vape juice? Is it difficult for you to differentiate between the two? Despite having a lot of fame, the cannabis industry is still in its infancy, and things are pretty much vague for a layman.

One of the confusions is whether CBD oil or CBD vape juices are the same or different? This perplexity is because the manufacturers interchange both the terminologies for marketing purposes. Even a regular vape pen user doesn’t know whether he vaped oil or liquid.

That’s why I thought to write a detailed article on the topic and transfer my knowledge to you to help you out in giving a clear picture. Stick around to know!

CBD oil or CBD tincture is for those who want CBD to be adequately absorbed and broken down by those organs down the diaphragm.

First, CBD is extracted from the cannabis plant, and then, it is mixed with a food grade carrier oil such the hemp seed oil or coconut oil.

You vape CBD juice, and you use oil bilingually (i.e., under the tongue). The vape juices are less viscous than oil that makes it easier to vaporize.

CBD oil, on the other hand, cannot be smoked out and has to put under the tongue. If you try vaping the oil, chances are you will get a burning smell and disgusting taste, and I am pretty sure you don’t need that!

So, whenever you feel like vaping CBD, make sure you are using vape juice or e-juice, in general. It’s unfortunate to know that a lot of industries don’t really see the difference and use both the names interchangeably.

Therefore, you must play your role here and do your homework before buying and using them.

I am sure the definitions given above must have cleared any misconceptions you had regarding the difference between the two. The most significant distinction lies in the making; one uses food grade carrier oil while other is made up of less viscous compound.

As a result, CBD oil is thicker, and e-juice is lighter and has more vaporizing properties.

CBD oil’s concentration doesn’t let you vape it, so you can only use it bilingually (under the tongue). However, it can also be inhaled in very rare cases (keep in mind that it happens in exceptional circumstances and under some required conditions).

On the other hand, the vape juice, as the name indicates, can only be inhaled.

Because of thick concentration, CBD oils aren’t very homogenous as food grade oils such as olive and coconut oil don’t get mixed properly.

Therefore, they aren’t very clear apparently. However, the PG/VG used in vape juices is easily dissolved, which, in turn, gives them a crystal-clear appearance.

CBD vape juice or CBD e-liquid is a compound mainly used for recreational purposes. However, you have got to keep an eye on your safety, despite it being the most nontoxic drug around.

The VG infused CBD e-liquid is surely harmless, but it can be dangerous when put in a vaporizer.

Especially the ones that aren’t purely homogenous can put your life in danger. The oily layer might separate, and the vaporizer may not be able to cope with it.

It can be avoided by using a tank having a ceramic heating element and preventing the use of cotton wick for soaking. The wisest option would be to choose a 100% homogenous e-liquid so that you are on the safest side.

Discover The Best Dry Herb Vaporizers In The UK

How Do You Fix Your Vape Pen Common Issues: Troubleshooting Guide

How To Get Opiates Out of Your System Fast?

Kratom For Pain Relief: Choose From These Top 12 Strains

A Detailed Guide To CBD And Infertility